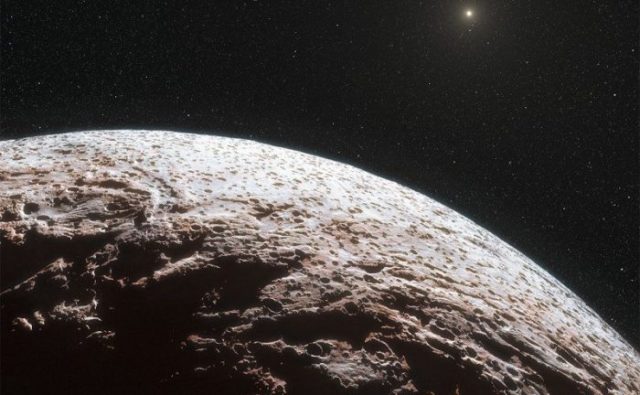 AstronomerWizards have found themselves (and us!) a new Dwarf planet in our solar system. The motherfucker is like, way out there. But out there no less.

Scientists in Michigan have found a new dwarf planet in our solar system.

But one of the most interesting things about the new object, known for the time being as 2014 UZ224, is the way astronomers found it.

David Gerdes of the University of Michigan led the team that found the new dwarf planet. Gerdes describes himself as “an adult-onset astronomer,” having started his scientific career as a particle physicist.

He helped develop a special camera called the Dark Energy Camera that the U.S. Department of Energy commissioned to make a map of distant galaxies.

A few years ago, Gerdes had some undergraduates visiting him for the summer. He decided to give them a project: He asked them if they could find some solar system objects lurking in the galaxy map.

How do you find solar system objects in pictures taken of the sky looking for galaxies? Well, you look for things that move: “Objects in the solar system, when you observe them at one instant and then a little while later, they appear to be in a different place in the sky,” Gerdes says.

Stars and galaxies are so far away, they’re basically stationary. But a planet or asteroid will be in a slightly different position from night to night. It will appear as a dot of light that seems to be moving across the stationary backdrop of stars.

Connect the dots night after night and you can begin to calculate the object’s orbit around the sun.

But the images Gerdes had from his galaxy map weren’t taken night after night.

But they were able to develop software that can do just that.

The dwarf planet that Gerdes and his colleagues have found isn’t the first distant dwarf planet astronomers have found in recent years. Sedna, Eris and Makemake have all been discovered in the past decade or so. Add to that Pluto, which used to be a planet until it was demoted when the definition changed.