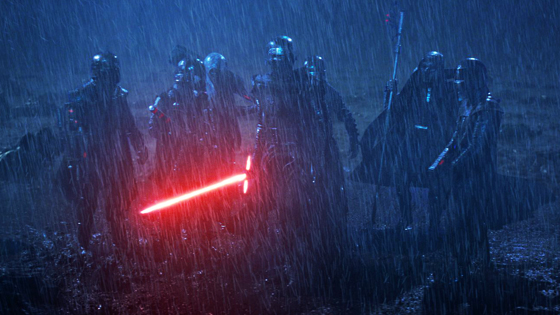 I have to admit. I thought the Knights of the Ren were going to, you know, be in Episode VII. After all the hype surrounding them. Who knows, hopefully they’ll be featured in Episode VIII. And maybe they’ll get their own spin-off movie. I guess.

In Star Wars: The Force Awakens, audiences were briefly introduced to the Knights of Ren, a shadowy group that rose up in the years after Return of the Jedi and served the equally mysterious Supreme Leader Snoke. The villainous Kylo Ren (Adam Driver) counted himself among their ranks, and though we don’t know much about them, what we can infer is pretty terrible based on their association with the onetime Ben Solo. There’s apparently lots more to learn about the Knights, though, and one person who wants to delve deeper into their story is none other than Force Awakens director J.J. Abrams.

Abrams spoke with Collider about his dream subject for one of the upcomingStar Wars anthology films — which so far include Rogue One and the untitled Han Solo project — and it turns out that the Knights of Ren are at the top of his list.

“I gotta say [Lucasfilm president] Kathy Kennedy, who’s running it all, she seems to be pushing all the right buttons,” the director told Collider of his approval of the direction of the spinoffs so far. “There isn’t something that I’d love to see—I guess the one thing I would say is there’s a Knights of Ren story that I think would be pretty cool to tell.”

It’s unclear what role, if any, the Knights of Ren will play in Episode VIII and how that might play into any future spin-offs. Abrams’ vision for a potential spinoff could also come from some story beats that were scrapped from The Force Awakens. Whatever the director has in mind, it’s an intriguing concept that we hope someone will explore further down the road. If only the title A Knight’s Tale wasn’t already taken.