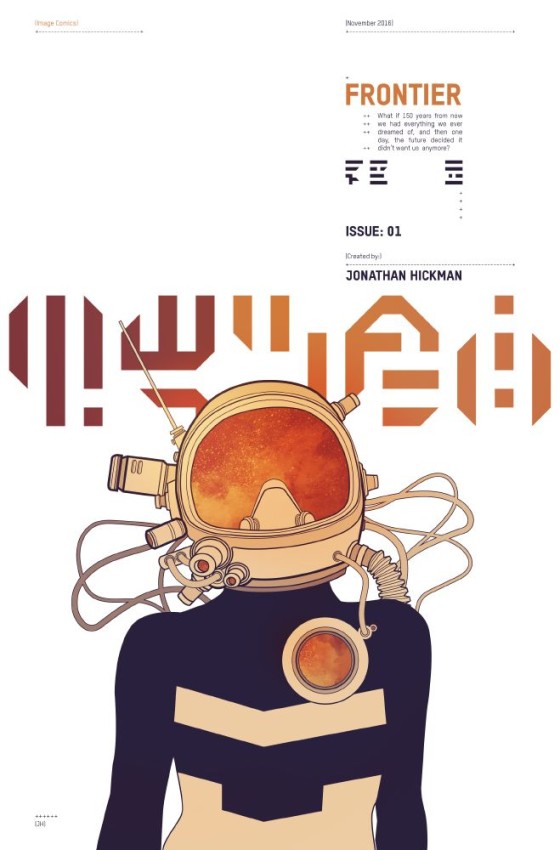 I’m pretty much down for anything Jonathan Hickman does. So giving me some sort of failed-stated Star Trek riff? Sold.

Jonathan Hickman’s new Image series sees him going where he has not boldly gone in quite a while: the writer will serve as both writer andartist for “Frontier,” his new Image Comics series that he describes as “like Star Trek, but super depressing.”

Announced by Polygon, “Frontier” will will follow the crew of a single starship. But whereas a franchise like “Star Trek” is set in a peaceful future where Earth is a respectable place, the future-set “Frontier” follows what happens after the violence-prone Earth is cut from the peaceful intergalactic partnership of planets and left without access to FTL travel. The people of Earth succumb to infighting, eventually forming a homogenous society that imprisons those that don’t fit in (“the Accursed”) on the moon. But then those prisoners get drafted into a galactic war to serve as expendable grunts — a move Earth does in order to get back in with their ex-allies’ good graces.

“I just wanted the story to reflect kind of how I feel about society right now,” said Hickman. “Like, why would we assume expansion is going to work out? I mean, I have hope, but that’s it, any expectation I had as a kid when I first started reading this stuff — that the future, or exploration, or colonization is guaranteed — is nonexistent … I have hope, but the idea that some species would take a long, hard look at humanity and think, ‘Yeah, those guys look awesome, got to have them in our utopian society, immediately’ seems like wishful thinking.”

Hickman previously served as artist for his Image series “Pax Romana” and “The Nightly News,”but he hasn’t illustrated one of his own series in almost eight years. Hickman said that Andy Kuhnwill be assisting him with layouts.

The giant-sized first issue of “Frontier,” which will be 56 pages long, arrives in November