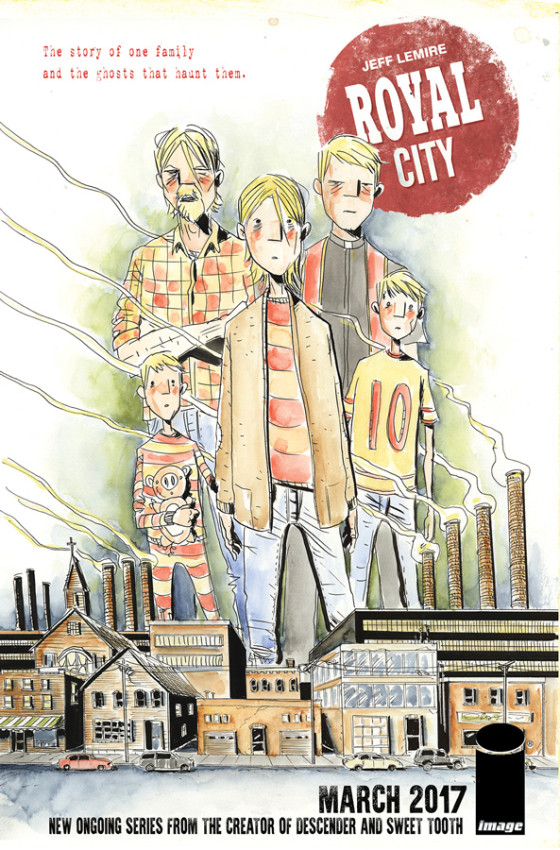 Superstar creator Jeff Lemire is already busy writing Hawkeye, X-Men, Wolverine, and Moon Knight monthlies for Marvel. But next year brings Royal City, a new multigenerational family saga set in a once-thriving factory town. Royal City comes from Image Comics, and represents the kind of ambitious creator-driven project that Image has become known for.  “The idea of Royal City is following this one family and the ghosts that haunt them,” teases Lemire, who notes the TV shows Six Feet Under and Transparent as influences. “I wanted to get back to doing comics that were more grounded.”

Royal City begins with Patrick Pike, a failing literary star who Lemire cheekily describes as “my opposite doppelgänger,” returning home after his father has a stroke. “He quickly becomes caught up in the dramas of his adult siblings,” Lemire explains. Tara is a successful real estate agent; Richie is “the black sheep of the family,” out of work and struggling for cash. And that’s not to mention Patrick’s parents: “His mom’s the overbearing matriarch of the whole family,” says Lemire. “The dad is this sheepish, browbeaten kind of guy.” Each member of the family will have a fully-developed story — with an intriguing twist Lemire doesn’t want to spoil that pushes Royal City almost into the realm of magical realism.

“I have a two-season plan, about 20 issues of the comic, that will tell one decisive story about the Pike family,” says Lemire. “But the idea of returning to this family of characters at different points in my life is really exciting to me. I think it could be something that I return to — an umbrella where I could tell other stories.” And while Lemire is keeping busy with his mainstream work, he’s thrilled about the one-man-band nature of Royal City. “I don’t have any editors or any collaborators at all on this book,” he says. “The good and the bad, it’s all on me now to do whatever the hell I want every month.”