Archives
« Report: ‘True Detective’ is Dead
‘Wonder Woman’ is first $100 Million movie to be directed by a woman »

It’s Wednesday. Which means its time for another installment of Buy These Flippin’ Comics. Look at this shit, two weeks in a row. Buckle up. I’m about to blow hard my blow hole about some comic news that blows, and also some about comic books that will hopefully blow me away.

I hope you’ll join me in the comments section, recommending your own picks for the week, supplementing my poor taste, taking it easy on my rot-skulled opinions.

So yesterday, I did something. Took a shit while reading Tumblr. Okay, okay, true. Caught me. So yesterday, I did something else. Read through some comics. Cleaned out my backlog of Injection and Southern Bastards. Fucking loved them. Fucking loved them. Then, I finished off the evening by reading Civil War II #0, a title that can only exist and make sense existing with the parameters of the comic book community. Civil War, was, at best a $5 preview. Gorgeous artwork, a forgettable story. $5. Literally numbered issue zero.

When I was finished through reading like, the first seven comics I’ve read since January, I sat there juxtaposing the different experiences between two creator-owned titles, and a Disney-owned pamphlet for yet another Marvel Super Event.

I came up with a few of questions.

Questions, mind you, I don’t have the answer to.

But questions, double mind you, that seem even more pertinent in the face of today’s comic book fandom-shaking Marvel and DC developments. 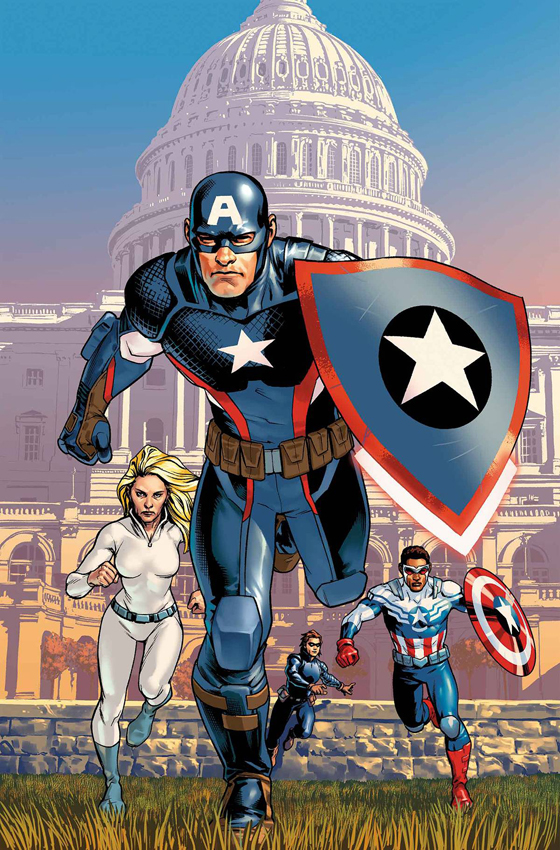 We’ll get more into this later. 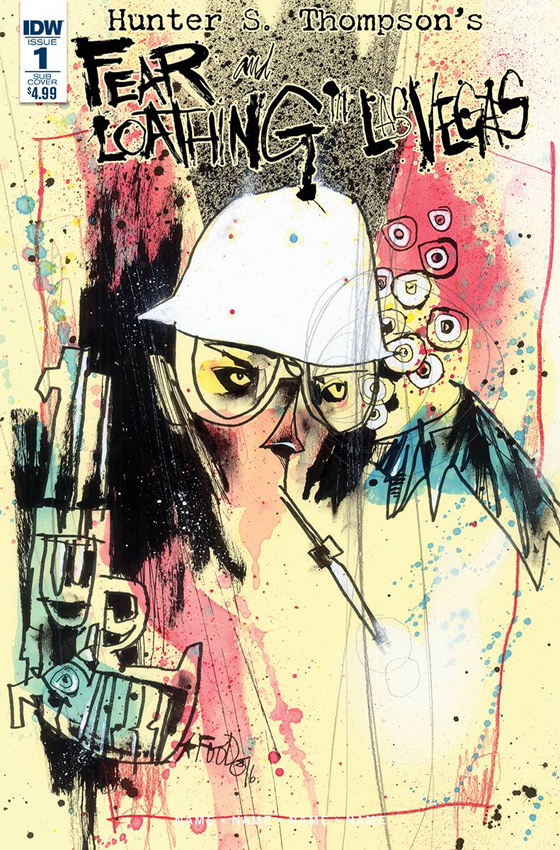 Fear & Loathing is getting itself a comic book adaptation, and it’s hitting me at the perfect time. Why, with this long weekend coming up, who is to say! Who is to say I can’t crush three energy drinks, pop a Sudafed (I’ve got fucking allergies, you monsters), stick my ass into the Slurpee dispenser at the 7-Eleven, and read this upside down while my wife screams.

“I thought we were buying a Powerball ticket!”

And I’m hanging upside down.

She’s throwing her ring like it’s cursed by the Beast.

She’s running out of the door.

Isn’t this what Steven America wanted when he won this country for us from the Nordic Gods?

Isn’t this what the spirit-golem of Hunter would want? 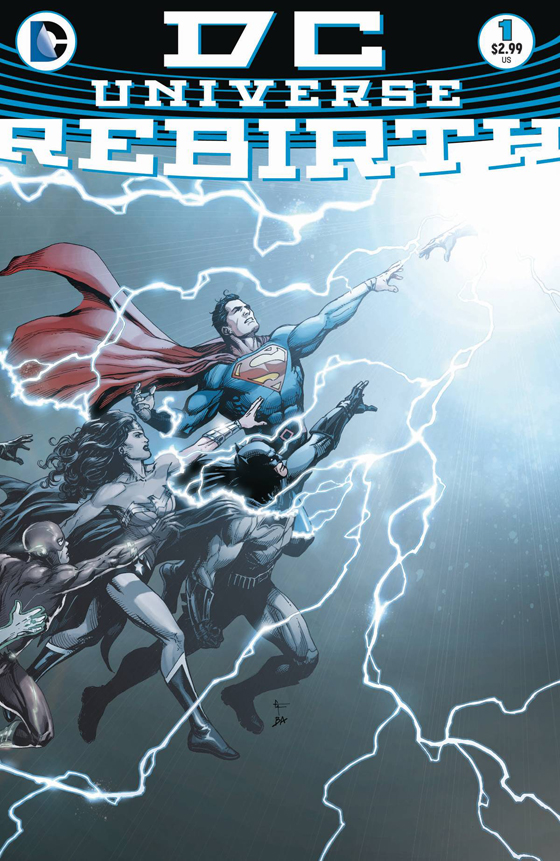 Apparently Dr. Manhattan is responsible for Rebirthing the DC comics universe? Geoff Johns has absorbed the Watchmen Corpus into the existing-current-presently-temporary-ever-morphing DC comics universe. Subverting the most famous subversion of Comic Book Heroes by absorbing the series into the soul of the type of Overblown Comic Book Event that it sought to desparkle, or at least examine, nearly thirty years ago.

We got an obvious ploy to push issues over in the House of Mouse, and a shameless attempt to leverage a classic for new buzz over at the Distinguished Competition.

We’ll get more into this later. 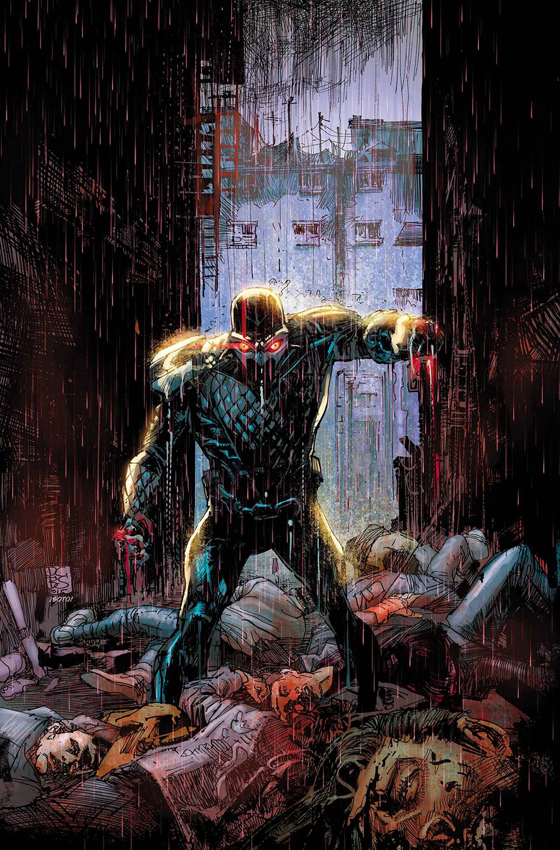 Amid all the gnashing of my teeth about the Big Two, the companies still do support the esoteric. Sure. This esoteria usually only survives for something like four issues, and then disappears into the bog of neat but unmarketable ideas. Sure. But it is still something, these occasionally burps of talent, oddity, talented oddity, odd talents. Nighthawk seems to fit this mold.

What is Nighthawk about? I have no fucking idea. What I do know is that one of my favorite artists, and absolute beast at the Twitter game, Ramon Villalobos is shepherding the artwork. Villalobos is the dude who splits his time dissecting what sort of awesome sneakers your favorite superhero would wear, and drawing dope shit. I’ve been a fan of his for a while, and anything with his name is getting a purchase from me.

It doesn’t hurt that it seems to be speaking to two of my favorite things: people smashing the red sauce out of one another en masse, and cool sneakers. 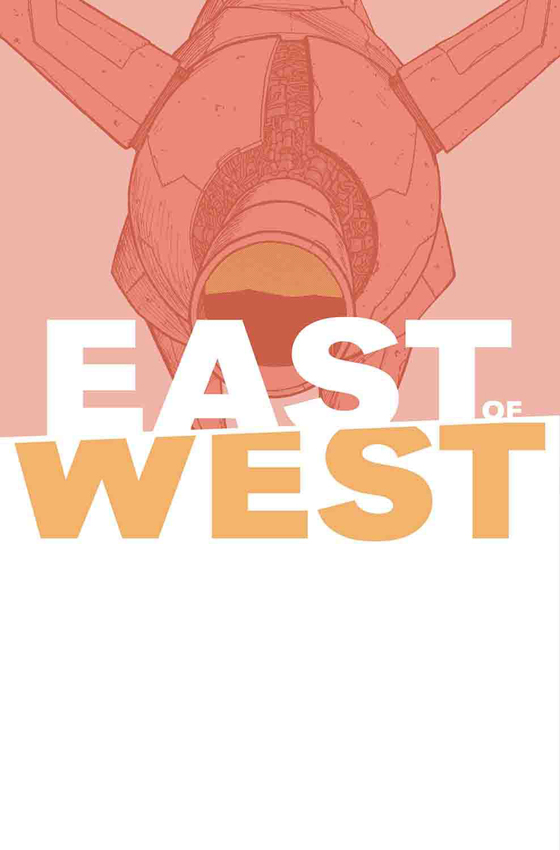 They say behind every pessimist is a disappointed optimist. They also say that behind every thirty-three year-old godless absurdist is a formerly overweight high school dork who didn’t lose his virginity until twenty-five who also spent those first twenty-five years screaming at the stars, having shitty psychiatrists throw psychoactives and anti-depressants off the walls of their psyche like shotgun spaghetti, and reading comic books.

They say that, right?

And as one of those aforementioned monstrosities of borne out of Nietzsche Reading Groups, video games, convenience story philosophy conversations, and a general malaise at the Universe, I think East of West speaks to me. A relentlessly nihilistic book that explores our Worst (if memory serves me, you can tell I’m speaking generally, I’d never let one of my students write like this), I enjoy its science-fiction Western Thanatopsis. 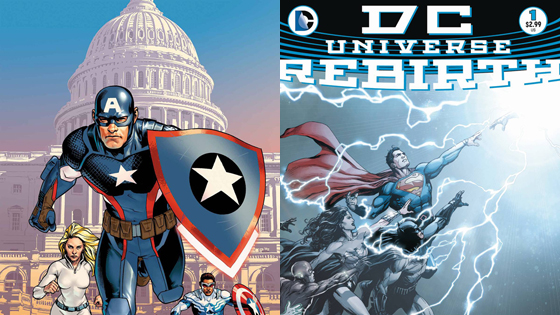 Back to my questions.

Last night, after finishing the big corporate $5 pamphlet, the series about Southern RotGut Americana, and the series about a Sentient Ghost AI, I sat there thinking. Sitting there, I asked myself, and debated with myself over these questions, and never really found a satisfactory answer because maybe there are no right answers.

What is the function of a comic book? Does it have an obligation to meet a minimum requirement? Does it have to tell a tale? Or is it simply a medium, to be exploited? When is it appropriate to deconstruct a comic book? Do you do it issue by issue? Story arc by story arc? Or do you interrogate the texts through both means? Is it fair to get mad at a company for selling me a catalog for an upcoming event for $5? Or is that simply the mechanism through which they’re distributing their propaganda, and it’s part and parcel of superhero comics? Is it fair to criticize a company for writing stories that only serve to push issues? Is it possible to push issues with a sensationalized story, and maintain narrative integrity? What the fuck is narrative integrity? Can you have narrative integrity? Is it the author of the title’s fault for something as insipid as Steve Rogers saying “Hail Hydra”? Or do you hold editorial accountable?

What I do know is that my knee jerk, over-caffeinated and emotionally unstable reaction to both Rogers and Dr. Manhattan has me feeling vaguely (okay, I swore about it on my Facebook, and in text messages to more than one person) angry about the entire fucking enterprise. I cherish these characters, and I place value in their stories. But I’m not sure I should. I want the stories to feel authentic, in fact I demand them to. But I’m not sure I should.

I don’t get mad at my dog if I leave her inside all day, and she drops a Brown Death Bloom on my kitchen floor.

What else would I expect, given a dog?

What else would I expect, given such a Tumblr tag?

What else would I expect, given the realities of Corporate-Owned Comic characters?

What is fair to expect? At a certain point is the blame less on the comic book publishers, and more on me for not accepting what comes with reading the Big Two?

If my dog is left inside, she’s going to shit. If I click #fist, I’m going to see knuckles in asses. If I follow Marvel, I’m going to have to deal with Civil War III #0 – Adamantium Edition.

Is it fair to expect otherwise? Or perhaps that’s the wrong word.

It realistic to expect otherwise? Is this a time for saber rattling? Or the Serenity Prayer?

I wish the former, but I suspect the latter.

But uh. Enough about me. How about you? What you reading this week?