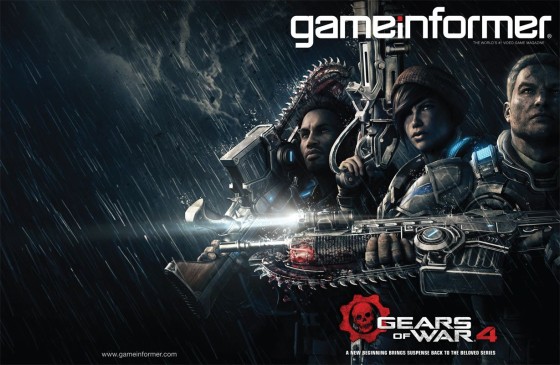 Gears of War 4 takes place 25 years after Gears of War 3, and it features a new trio of protagonists led by JD Fenix, who is the son of legendary soldier Marcus Fenix, reports Game Informer.

Marcus Fenix, of course, was the lead character of Epic Games’ original Gears of War trilogy on Xbox 360. Game Informer describes his son JD as “an idealist who ran away from home at a young age to join the [Coalition of Ordered Governments] militia only to go AWOL after a classified incident that players will learn more about during the game.”

In Game Informer’s coverage trailer for its April 2016 issue — the cover story for which is about Gears 4 — a developer from The Coalition says the game tells the story of “a son of a war hero finding his way in the world.” JD Fenix is voiced by Australian actor Liam McIntyre, who is best known for playing the title role in the second and third seasons of Starz’s Spartacus.

The younger Fenix is flanked by characters named Kait Diaz and Delmont “Del” Walker. Diaz is voiced by Laura Bailey, the veteran voice actress known for roles in games such as Tales from the Borderlands and Halo 5: Guardians. According to Game Informer, Diaz grew up as an Outsider — one of the people who don’t live inside the walled city-states that most of the humans on Sera call home.

Walker is voiced by Eugene Byrd, who has acted on television shows such as Bones and starred in last year’s Battlefield Hardline. Game Informer reports that Walker is, like Fenix, a former COG soldier; the orphaned Walker befriended Fenix at boarding school, and followed Fenix’s lead when he deserted the army.

For much more on Gears of War 4, check out Game Informer’s 14-page cover story; the digital version of the April issue is now live. Gears 4 is coming exclusively to Xbox One this holiday season.