Archives
« Rumor: Sylvester Stallone is appearing in ‘Guardians of the Galaxy Vol. 2’
This woman needs medical attention, someone please »

’23 Jump Street’ *will* be a ‘Men In Black’ crossover, with James Bobin directing 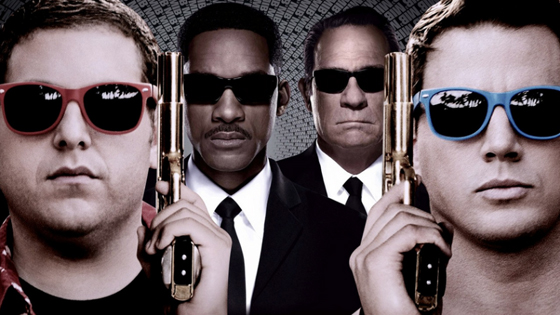 Hard to really knock the absurdity of a 21 Jump Street x Men In Black crossover, given that the movie franchise has been predicated on self-awareness and absurdity. So I’m down for the attempt, let’s see if they can pull it off.

“The Muppets” director James Bobin is in early talks to take over Sony’s “23 Jump Street”/”Men in Black” crossover film from Phil Lord and Chris Miller, who departed the project to helm Disney’s “Han Solo” movie. According to Variety‘s report, the film has not yet been greenlit but aims for a June production start date.

“Men in Black” stars Will Smith and Tommy Lee Jones will not return for the crossover, but “Jump Street’s” Jonah Hill and Channing Tatum will reprise their roles as Jenko and Schmidt. The studio hopes to relaunch “Men in Black” “with younger, fresher faces.”

Though Lord and Miller will no longer direct, they will stay on as producers alongside Neil Moritz. Rodney Rothman penned the script.

Reports of the crossover first surfaced in leaked emails from the studio’s major hack in December 2014.

This move would continue the blockbuster success of the “Jump Street” franchise while also rejuvenating “Men in Black.” The third film in that series apparently lost money for the studio, even after earning $624 million worldwide.