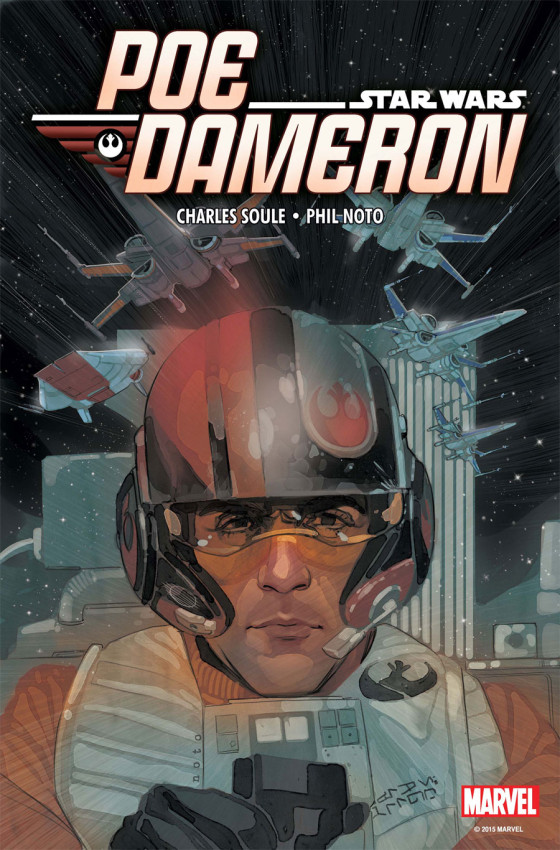 Poe Dameron got himself an ongoing comic book series coming down the pipe, courtesy of Soule and Noto. I don’t know if I’ll be checking it out, cause Christ, I can barely keep up with what I’m “actively reading” these days. But any comic book featuring Phil Noto artwork is tempting.

Following the record-obliterating box office run enjoyed by“Star Wars: The Force Awakens,” it seemed like only a matter of time before Marvel announced a comic book tie-in. Now, USA Today has announced that Poe Dameron, the best fighter pilot in the Resistance, will get his own ongoing comic book series.

Poe as played by Oscar Isaac has become a breakout character from “The Force Awakens,” and series writer Soule told USA Today that seeing “people reacting to him so strongly now just feels like we’re hopefully in a great position.” Soule reacted strongly to Poe, sharing his enthusiasm for the character during “Force Awakens'” opening weekend.

“I’ve seen people on Twitter and Instagram looking for Poe Dameron in the comics,” added Noto. “Now the pressure’s on us to deliver.” Writer Charles Soule was also one of those people tweeting praise for Poe Dameron.

The series will be set prior to the events of “Star Wars: The Force Awakens,” in the gap between “Return of the Jedi” and the latest Star Wars film. The series will also introduce a new threat from the First Order that will serve as Poe’s primary antagonist, with Soule commenting that the new villain “is going to feel fresh and cool.” BB-8 and some of the newly introduced X-wing pilots will round out Poe’s supporting cast.

“Poe Dameron” will be the second series set in that 30-year gap, following last year’s “Journey to the Force Awakens – Shattered Empire” limited series. A prose novel, “Before the Awakening,” also explored Poe Dameron in this time period.