First Look: The Punisher and Daredevil from ‘Daredevil’ Season 2 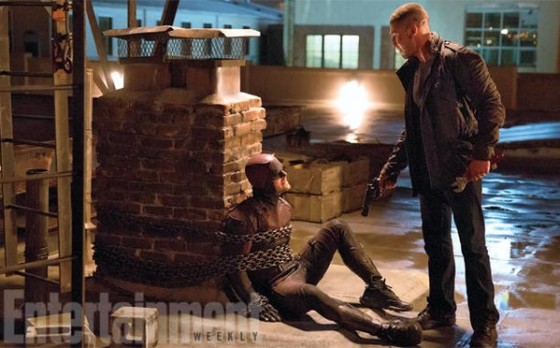 Daredevil excited a lot of Marvel fans by bringing in the Punisher for season two. And it looks like, at least at first, Matt Murdock and the viewer are going to struggle with whether or not Frank has a point.

Entertainment Weekly has a fairly lengthy look at the new season, and the Punisher will be a big focus. In fact, he’s the first character you see, according to the showrunners, and you won’t feel sorry for who Frank is taking out. This quote from showrunner Doug Petrie says it all:

Viewers watching the show will be rooting for this guy with a gun but we’re also going to force people — the way we force Matt — to second-guess themselves.//Taking lethal justice into your own hands in America in 2015 is tricky s–t.

It also sounds like Matt’s love life will be heating up; it turns out that just like in the comics, they’ll be getting closer, and just like real life, Matt’s ex will turn up to complicate things. Of course, the fact that his ex happens to be the assassin Elektra will just add to the problem. About the only thing we don’t have right now is a release date, although the show is on track for 2016.