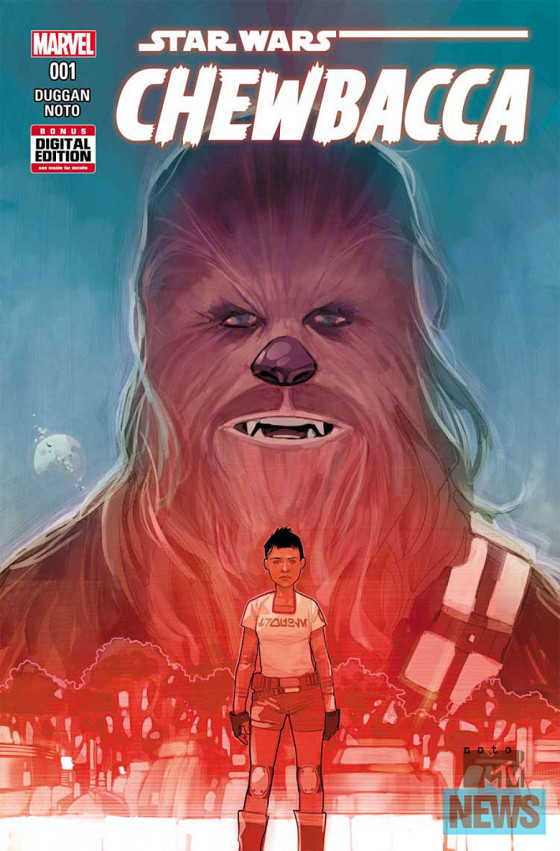 We live in a time when Phil Noto is drawing a Chewbacca mini-series. An absurd time. An unbelievable time. A glorious time.

Following in the footsteps of Princess Leia and Lando, Chewie is set to get his own Marvel Comics limited series in “Chewbacca” by Gerry Duggan (“Deadpool”) and Phil Noto (“Black Widow”). MTV News sat down with Duggan to discuss what’s next for Han Solo’s furry friend.

As fans are aware, Chewie doesn’t speak Standard — only in howls and grunts. However, following the “Groot” series, Marvel is no stranger to characters who aren’t very outspoken and Duggan revealed that he has a plan in place for the language barrier. “It’s one of the first things we talked about. That we were going to let Chewy be Chewy and not try and change anything that’s on the internal [dialogue], the caption boxes or anything like that.”

“But you know, a little bit of good news here is that Phil Noto is my collaborator on this book, and he’s gonna be able to tell the story whether or not there are any balloons or boxes at all,” he added.

Duggan also weighed in on where readers will find the Wookie within the pages of his series and how that wordlessness will affect the storytelling. “Chewy is on a very important mission when we first meet him, and you’ll be able to tell that right away without hearing him speak. But script wise, what’s been very fun for me, I’ve been writing each roar and yell twice. Once for the letterer, to be printed exactly as it is on the page and then once in parentheses for the team that basically is Chewy’s whine in English. And that’s just for internal use. That’s just so that everyone can be on the same page and know that, hey, we’re telling this story visually and anything that we do need to know… He’s got a friend on this planet, a young woman and she speaks the basic language — so we won’t be in the dark.”

Marvel Comics dropped two covers for the announce, including one from series artist Phil Noto.
Duggan also dodged the inevitable Han Solo question, but left the door open for the character to show up. “Well, what have we here, a rebel spy trying to steal all of our secrets… You know what, this is a story that really focuses on Chewbacca, but I never say never. You never know who might turn up or what might turn up.”

“He’s got the warrior soul,” Duggan said of the character. “He’s maybe a former Ronin that has a new master in Han. But he’s doing this for the greater good. He’s set aside his own ambitions to join the fight. And the best thing about Chewbacca is that he is a character that gets you out of trouble in ‘Star Wars,’ and not into trouble in ‘Star Wars.'”

On working with Noto, Duggan shared, “I got this note [from Noto] with the first page of art a while back. ‘I feel like my entire life has been leading up to this moment,’ and I wrote back, and I said, ‘I know,’ triple exclamation point.

“We’re both married with kids, it’s not like we haven’t had other sort of big [events] in our world, it’s just this feels like the biggest one. My mom didn’t know who ‘Deadpool’ was… She knows now, but she knows who Chewbacca is. And it’s fun to have my son ask me what Chewbacca is up to today. It’s neat. It’s been a real special experience.”