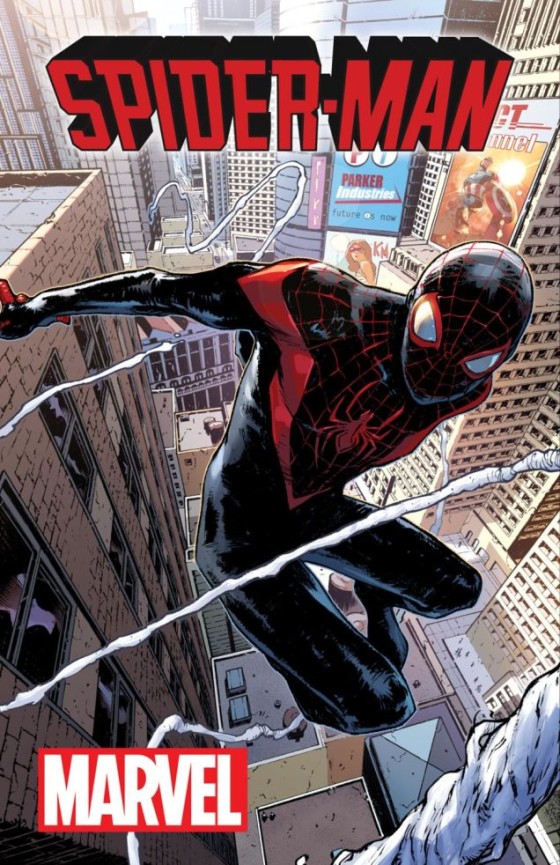 Oh shit! Miles Morales! Spider-Man. Maybe not in the movies, but the web slinger is headlining a Spider-Title in the comics this Fall.

The Ultimate Universe may be going away, but Miles Morales is here to stay. The latest proof: He’s the star of Marvel’s relaunched “Spider-Man” series set to debut this fall post-“Secret Wars”, as revealed late Saturday night by the New York Daily News. The “Spider-Man” creative team will be writer Brian Michael Bendis and artist Sara Pichelli, who first introduced the character in 2011.

Bendis stated that Miles Morales won’t be “Spider-Man with an asterisk,” but rather “the real Spider-Man.”

“Our message has to be it’s not Spider-Man with an asterisk, it’s the real Spider-Man for kids of color, for adults of color and everybody else,” Bendis told the New York Daily News.

The New York Daily News article states that Peter Parker will serve as a mentor to Miles Morales in the series, but it’s unclear at this point whether or not the original Spider-Man will still be an active superhero. An “All-New, All Different Marvel” teaser imagereleased earlier this month showed both Miles Morales in his Ultimate Spider-Man costume, along with a more traditional Spidey.

“Many kids of color who when they were playing superheroes with their friends, their friends wouldn’t let them be Batman or Superman because they don’t look like those heroes but they could be Spider-Man because anyone could be under that mask,” Bendis said of the appeal of Miles Morales, who is of African-American and Puerto Rican descent. “But now it’s true. It’s meant a great deal to a great many people.”

It had been clear that Miles Morales would join the classic Marvel Universe for weeks. Most notably, the character’s appeared in the “All-New, All-Different Avengers” story released last month on Free Comic Book Day, set in the post-“Secret Wars” Marvel Universe and featuring Miles as part of the Avengers roster. The Ultimate Universe, first introduced in 2000’s “Ultimate Spider-Man” #1 by Bendis and Mark Bagley, is expected to end as of the conclusion of the currently ongoing “Ultimate End” miniseries, also by Bendis and Bagley.

Created by Bendis and Pichelli, Miles Morales first debuted in 2011’s “Ultimate Fallout” #4, and soon became the Ultimate Universe’s Spider-Man following the death of that world’s Peter Parker. The character quickly gained attention and popularity — along with some criticism — as a minority character taking on one of pop culture’s most iconic superhero identities.