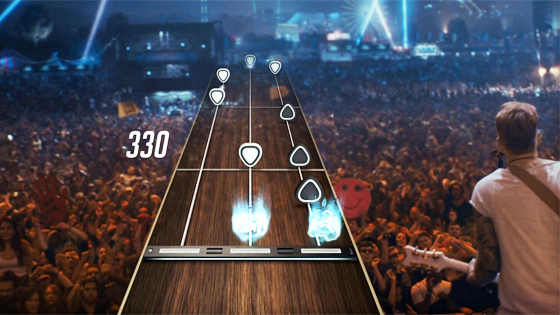 I don’t fuck with Guitar Hero at all. At all! But this reimagining of the franchise seems oddly appealing to me.

Guitar Hero Live’s main campaign is designed to play out from the first-person point of view of a rocker on stage, with actual humans both in the audience and on stage with you.

Think of it as two parallel dimensions that you keep hopping between in real time. If you’re playing well, you get the “good” version with the audience going crazy and the band nodding favorably. Start playing poorly and the screen will briefly distort and switch to the “bad” version, where the band starts giving you incredulous looks and the audience gets increasingly irritated as the song goes on. (We also noticed some poster board signs change — a smiley face turned sour, for example.)

FreeStyleGames shot each performance twice using a motion control camera rig that could replicate the exact same movements multiple times over so that you could jump from “good” to “bad” at any point and maintain the same first-person continuity and choreography. We had a chance to play through two different venues — each with its own pre-performance build-up, literally walking from the green room on stage and onto a stage in front of hundreds or thousands of fans. The effect is cool in action (assuming you pay attention the background at all while playing), but we’ll have to see how many venues are included in the final build. We could see it getting pretty repetitive.

Guitar Hero TV is what the name implies: a series of “music video television channels” available to all players on its network. The difference between this and MTV, of course, is that the music videos are playable. So say you’re on a channel, and a curated show of pop music videos is playing with a traditional highway of notes, a la every other Guitar Hero game. You would immediately be competing on that song with everyone else watching and playing the same channel. Each channel will have its own set of different programs dedicated to different music, with the hope being players will discover songs and artists outside their comfort zone.

Jackson and his team believe the absence of friction between the player and this centerpiece mode will be key. To hop into Guitar Hero TV, the player need only tap a button on the plastic guitar (it looks like a little box) and they’re instantly playing on a channel. Tap that button again, and a TV guide-like menu appears, offering additional channels, each with its own unique programming. Tap that button one more time, and a list of songs available On Demand appears. More than one player will be able to play the mode locally, though the developer wouldn’t comment on the inclusion of additional plastic instruments like bass and drums.