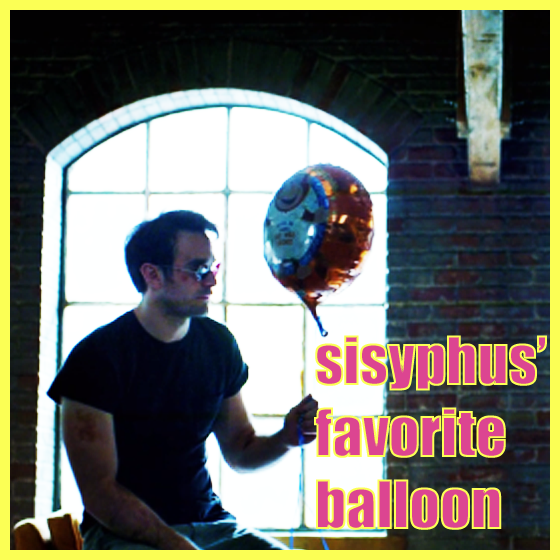 Look at Matty Murdock. Holding a balloon. While he looks up to Hey-Zeus Cristos for guidance, he strikes me as a Sisyphean hero. His approach to life smacks of Rieux from The Plague. When Rieux is asked if he knows what it means to be a doctor during plague time he responds, “a never ending defeat.” Yet he dusts himself off, and carries on. Much like Matty. Much like all of us amidst the Pointless Expanse’s Grind. We are all Sisyphus. We must all hold balloons. And so to make this all fit into a dumb package: this is Monday Morning Commute. A list of the metaphorical balloons I shall be holding onto this week, begging them to lift me above the malaise.

Rendar’s finished it, and he’s called it his favorite MCU property.

I don’t know if I’m that hype, but it is fucking amazing.

I have two episodes left.

Rendar introduced me to these guys.

They finally clicked as I was cruising with him on Saturday.

One of my favorite shows is a) somehow still alive and b) seeing a new season premiere this week.

After last season’s finale and its twist (no spoilers), I’m intrigued to see where they’re going.

Which is probably the point of a season finale. I know.

Need to chill: with the caffeine

I know it’s borderline heretical and anathema to my own personality to say.

But my fucking caffeine consumption has been way too high lately.

Upset family members (because we can’t afford to bring all the cousins, and everyone wants an exception.)

A travel agent dude (friend of a friend) who came back with a honeymoon estimate $1,700 over our “worst case scenario” amount.

And that’s in the last week. My brain is shattering.

I think? Told my class on Friday I listened to them.

And they were like, “WUT.” Then I asked them if they listened to RTJ.

They said they didn’t. I had to inform them that meant they didn’t know shit.

How about you? What are your metaphorical ballons?

Tags: all the daredevil, Daredevil, dillinger escape plan, father, i seriously need to chill with ALL the caffeine, ILoveMakonnen, orphan black, wedding shit