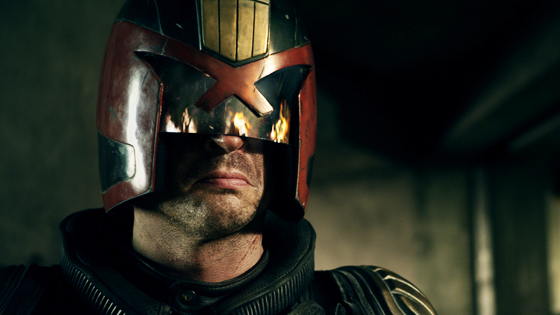 Where there’s a fucking dedicated producer, there’s a way. Dredd producer Adi Shankar has revealed that he’s bringing the series back. Maybe not as the fucking sequel we want (yet). But at the very least as an online mini-series. For free.

It would seem that you can never count out the power of the fanboys. After the buzz surrounding the leaked “Deadpool” footage prompted Fox to greenlight the long developing spinoff movie starring Ryan Reynolds, it looks like the “Dredd” faithful will finally get a followup to the 2012 movie. Kind of.

The Wrap reports that producer Adi Shankar has secretly been working on a seven-part “Dredd” miniseries and it will drop this month, online, for free. Why? Because as Shankar himself says, he doesn’t “give a fuck” about money. In a video posted to his YouTube channel, the eye-makeup enthusiast talks about the “devastating” blow he felt when “Dredd” tanked at the box office, losing out to the Jennifer Lawrence thing “House At The End Of The Street,” and the Jake Gyllenhaal starring “End Of Watch.” But he thanks the fans for their persistence and credits their enthusiasm for making this new thing happen.

There’s no word yet if Karl Urban is involved, but Shankar has experience with this kind of thing. A couple years back he was behind the unofficial “The Punisher: Dirty Laundry” short (watch it here), so he knows how to deliver what fans want.

Now all you fucks go and watch this and bang on pots. Bang on pats. Shout at the elderly. Show the love. Get the the sequel I demand.