Ricky Gervais returning to ‘The Office’ in a new movie 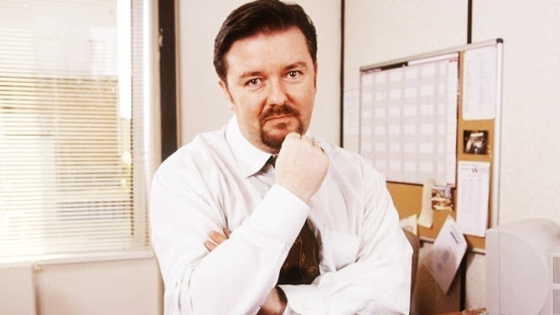 Ricky Gervais will once again be returning to The Office. Sort of. Technically. The actor will reprise his role as David Brent in a flick that will pick-up some 15 years after the conclusion of the show.

Ricky Gervais will once again portray David Brent, the painfully awkward middle-manager from The Office, in a full-length movie set to enter production next year. Life on the Roadcatches up with Brent 15 years after the conclusion of the BBC2 show that launched Gervais to global stardom and inspired a successful American adaptation. “He’s a sales rep now, selling cleaning products up and down the country, but has never really give up on his dream of being a rock star,” BBC Films announced today in a press release.

There are many similarities between the hard-to-watch David Brent persona and Michael Scott on NBC’s version of The Office, though the US character never really shared Brent’s affinity for rock and roll. But apparently “Free Love Freeway” wasn’t enough to make David Brent a rock god; the movie follows him along on a self-financed tour that sees Brent digging into his pension to keep performances going. It will be shot in a mockumentary style similar to The Office, with Brent initially under the impression he’s the subject of a flattering, big-budget rock documentary. In fact, it’s more of a “Where are they now?” production, which should lead to some comedic gold and have audiences feeling sorry for the guy all over again.

The character has made a few appearances since The Office wrapped up with its two-part Christmas special in 2003, including brief guest spots on the NBC show and a series of Learn Guitar with David Brent videos published on YouTube. It hasn’t yet been announced whether Life on the Road will actually get a theatrical release or if it’s being produced solely for television.