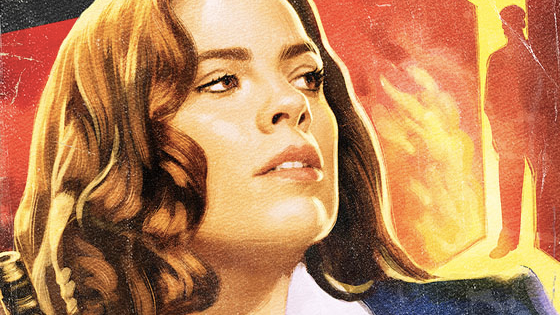 If you know me — you know I’m straight-up goddamn obsessed with Winter Soldier. So telling me that the directors behind Probably My Favorite Marvel Movie are going to helm some Agent Carter episodes results in me hyperventilating. But those talented fuckers aren’t the only Marvel directors tackling the wonderful Peggy Carter. Nuh-uh.

When Hayley Atwell brings her “Captain America” character to television in ABC’s “Agent Carter,” she’ll find some familiar faces behind the camera.

Marvel Studios Co-President Louis D’Esposito revealed this afternoon during the “Marvel Television Presents” panel at Comic-Con International that “Captain America: The Winter Soldier” directors Joe and Anthony Russo will helm the second and third episodes of the series, while “Captain America: The First Avenger” director Joe Johnston is set for the fourth.

D’Esposito, who directed the “Marvel One-Shot: Agent Carter” short for the “Iron Man 3” Blu-ray, will helm the pilot, penned by “The First Avenger” screenwriters Christopher Markus and Stephen McFeely.

Set in 1946, following the events of the first “Captain America” film, the series sees Atwell reprise her role as Peggy Carter, who must balance her routine office job at the Strategic Scientific Reserve with her secret work as an operative for Howard Stark.”Agent Carter” is scheduled to premiere on ABC at midseason, during the two-week break of “Marvel’s Agents of S.H.I.E.L.D.”