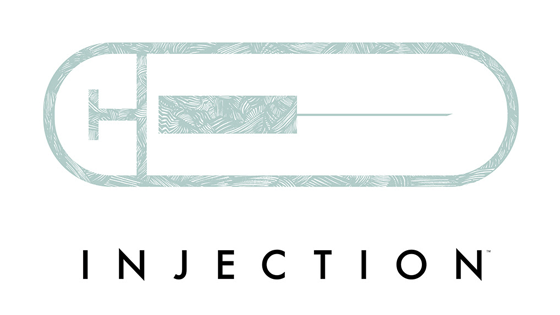 Good god. I was pretty ass-chapped and whimpering about Ellis and Shalvey leaving Moon Knight after six-issues. (I believe Bellaire is staying on?) But holy fucking better-than-consolation prize! The entire fucking team is doing a creator-owned at Image.

If you’re like… well, pretty much everyone who has read it, you’ve loved Warren Ellis, Declan Shalvey and Jordie Bellaire’s run on “Moon Knight”, and you were frankly mortified by the departure of two thirds of that team after the upcoming sixth issue. There’s a good reason why you feel that way, as Ellis has delivered one-and-done stories that cut to the core of the character, and Shalvey’s doing career-best work as he gets beyond the brawler at the core of Marc Spector, especially with Bellaire coloring him.

As much as we were sad to see them leave, the fact that the entire team has moved onto “Injection”, an utterly exciting sci-fi project that was just announced at Image Expo, softens the blow and instead makes it something everyone at Multiversity is thankful for. This team working on a creator-owned project that delves deep into a not so unrealistic yet still fantastic (in one sense) future with the ability to control the look and feel of all elements is pretty much our greatest hopes for them realized, and April 2015 can’t come fast enough.

What’s it all about though? Here’s the synopsis from Image’s press release:

INJECTION explores how loud and strange the world is becoming, and the sense that it’s all bubbling into chaos—a chaos poised to become the Next New Normal — and that we did this to ourselves without thinking for a second about how we were ever going to live inside it.