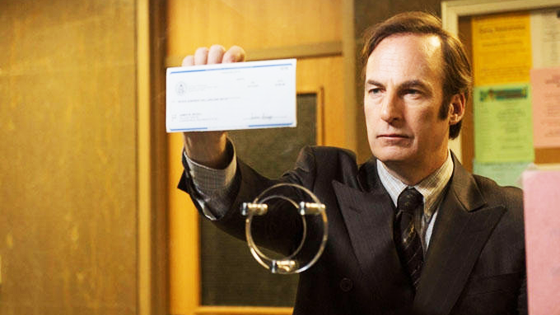 Shit I mean not like literal time travel, but the show is going to be NON-LINEAR AS FUCK. Apparently. The son of a bitch starts in 2002 when good old Saul wasn’t even Saul, but it’s going to span the length of Breaking Bad. And beyond?!

Previously scheduled to launch this fall, AMC has been feeling so good about their “Breaking Bad” spinoff “Better Call Saul,” that they upped the order to twenty-three episodes, across two seasons. The bad news is that this means the show won’t be hitting screens until early 2015, but the extra time means that creator/writer Vince Gilligan and his team have more opportunity to really flesh out the world of the show. And while details have tended to lean more heavily toward speculation than concrete fact, we now know the setting of “Better Call Saul.”

“We have to be a little more specific than we used to,” Gilligan said to the audience at the Television Critics Association, revealing that the show takes place in 2002. “It is indeed a period piece,” he added, with the focus of the story on Saul’s rise from small-time lawyer Jimmy McGill to criminal-law specialist (particularly for those on the wrong side of the law). However, he doesn’t dismiss the idea of playing around with the timeline, something Gilligan did with “Breaking Bad” which utilized flashforwards in later seasons.

“We like jumping around in time…” Gilligan said. “I would definitely point you in the direction that anything that’s possible in the world of ‘Breaking Bad’ is possible.”

And that’s certainly a curious statement, particularly as it regards any of the characters from the original series. Gilligan has long said he wants Walt (Bryan Cranston) and Jesse (Aaron Paul) cameos in the show and that could be one way to do it (even though the latter said he won’t be back). And there has been talk of dead “Breaking Bad” characters being resurrected too. Basically, the options are endless, which can be both a blessing and a curse. [Play List]