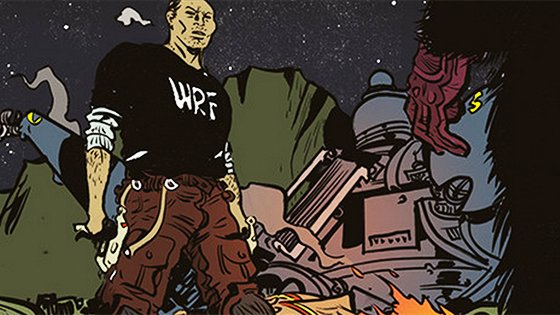 If just the idea of Paul Pope doing a sci-fi short isn’t enough to get you to watch this film, I don’t know. You’re probably not one of us! And we shall cast you from this space-ship with stones and poop-filled socks. Seriously though.

BoingBoing has premiered 7x6x2, the sci-fi short film that marks the directorial debut of Paul Pope.

Co-written and co-directed by Sridhar Reddy, who’s also developing an adaptation of Pope’s The One Trick Rip-Off, the space Western centers on a serviceman who’s tasked with repairing a large terraforming robot in a barren desert, where his campsite is surrounded by seven Rock Creatures, weaponized monsters thought to be extinct. When a young surveyor, unaware of the danger, shows up, they must work together to survive the night.

Pope, who’s  involved with the adaptation of his own Battling Boy, also created 7x6x2′s score with musician Ben Rubin, and is working on a graphic novella based on the first draft of the script.

The film was produced through a partnership between Tribeca Digital Studios and Sony, which enabled Pope and Reddy to use the Sony F55 camera prototype. [Robot 6]