Marvel teaming up EVERY SPIDER-MAN EVER in ‘SPIDER-VERSE.’ K. 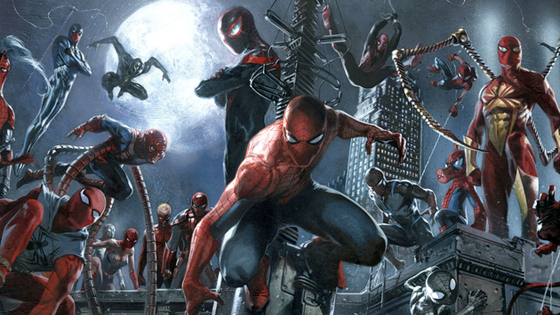 Crisis on Infinite Spider-Verse! In October, Marvel along with Dan Slott with Olivier Coipel will be dropping the thickest batch of Spider-Load you can imagine. All sorts of fucking Spider-Guys fighting stuff! In fact — all the goddamn Spider-Folk. So while I generally wouldn’t check out a Spidey event, the return of Parker combined with Coipel handling the artwork has me intrigued.

Just as Marvel has started winding down one big Spider-Man event, it’s gearing up for another.

In a live chat on Marvel.com Monday, Amazing Spider-Man writer Dan Slott and Marvel.com editor Ben Morse announced Spider-Verse, an event that will start in November and feature “every Spider-Man from every universe,” according to Morse. The event will feature art by Olivier Coipel. It will take place in Amazing Spider-Man and will spill over into other titles, Morse reported.

Slott promised that every Spider-Man and even a few new ones will either team up or fight in the event. And he really means every single one. Some preview art shown in the live chat featured the Spider-Man from the 2003 series 1602. Slott added that Miles Morales, Spider-Ham, the MC2 version of Spider-Girl, Spider-Men from What If? stories and Bullet Points Spider-Man, and even Spider-Monkey will appear. The only Spider-Man Morse wouldn’t confirm is the Superior Spider-Man. Jessica Drew Spider-Woman has also been confirmed.[Comics Alliance]