Archives
« Bitcoin founder may have been tracked down. Is all, “I only heard of Bitcoin three weeks-ago.” Yeah! Okay!
‘TOMB RAIDER’ going to pass 6 million in sales; franchise’s best-selling installment » 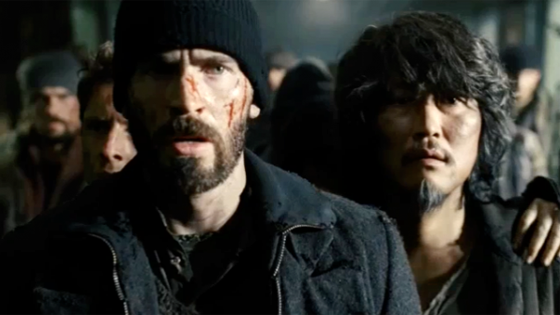 Snowpiercer finally has its United States release date! And fucking guess what! It may be coming out in the summer, but the Weinstein Czars certainly have buried the release in a pile of the proverbial frosted flakes! Holy shit.

Last month, we finally learned which version of Bong Joon-ho‘s Snowpiercer we’d be seeing in theaters. Now we also know when we’re going to see it. The Weinstein Co. have set a summer 2014 release date for the chilly sci-fi actioner, which had its world premiere in South Korea last summer. Hit the jump for more details on the rollout.

Box Office Mojo reports that Snowpiercer will open June 27, the same date as Transformers: Age of Extinction. As reported in February, this will be Bong’s uncut version of the apocalyptic drama, not the Weinsteins’ proposed dumbed-down one; also as reported then, the film is getting a limited release instead of a wide one.

But even if you don’t live in an area that typically gets limited releases, there’s hope for you yet. The Weinsteins are working with their VOD arm Radius-TWC on this, meaning it’ll probably hit VOD on the same date or not long after.

The dispute between the Weinsteins and Bong spilled into the public eye last summer. The Weinsteins reportedly wanted to recut Snowpiercer, which by then had already received rave reviews in Bong’s native South Korea, as a more conventional action-thriller. Bong fought back, lawyers got involved, and the argument dragged on for months.

Even after the two sides reached a compromise last month, it was unclear when exactly the Weinsteins would get around to releasing it. We’re just relieved to hear we won’t be waiting too long. [/Film]