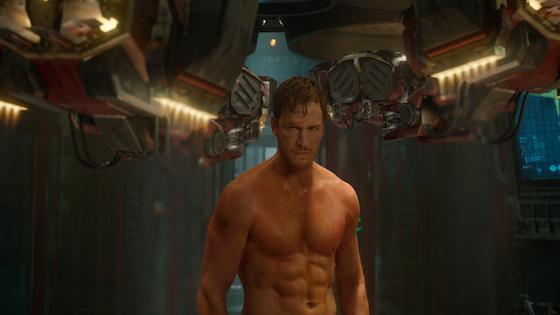 Sexy, glistening space abs sell.  It’s science.  Marvel would do well to put Chris Pratt’s prison-hosedown scene on the cover of every comic from here to August 1st.  We here at Omega-Level are no dummies, and plan on flooding the page with all the Star-Lord gut muscle you can handle, and probably a few more than that.  To that end we’ll also provide some Guardians of the Galaxy related content, as this week in BTFC I’ll be showing you some comics to go check out now that you’ve been thoroughly wow-ed by the movie trailer.  Even though the GoG are generally considered comic-book third-stringers, come August they’ll be as big (or bigger) than the Avengers, and it’s our duty to provide you the research material to impress your friends and neighbors with GoG factoids.  So hit the jump and learn about some books that will get you on your way to being that Guardians fan you always claimed to be. 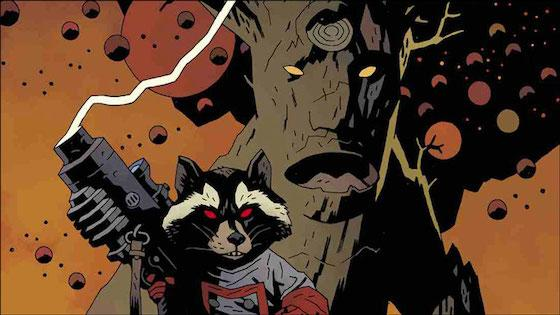 Clearly primed to be the breakout characters of the new film, Rocket Racoon and Groot are the C-3PO/R2D2 stand-ins, the Laurel & Hardy duo that wisecrack and playfully bicker throughout the flick and give the action scenes some comic levity.  Rocket Raccon is a playfully foul-mouthed, genetically altered space raccoon with a penchant for Rob Liefeld-sized weaponry, and Groot is the humanoid tree being who can utter but one phrase: “I am Groot.”  Interestingly enough, Groot is one of the oldest of the Marvel Heroes, created by Stan Lee, Jack “The King” Kirby, and Dick Ayers for Tales To Astonish #13, where he wasn’t so much a “hero” as a King Kong-esque tree monster.  Rocket Raccoon appeared several years later (officially) in Hulk #271.  Created by comic great Bill Mantlo as an obvious homage to the Beatles song “Rocky Raccoon,” Rocket started as more of an Errol Flynn, swashbuckling type.  It wasn’t until the 2008 Guardians reboot that Groot and Rocky finally met, but their friendship was a fast one.  You can check out these first appearances, and most of their major appearances together in this one handy trade.

SIDE NOTE:  You may or may not know of an organization called The Hero Initiative, which works to give a safety net to comic creators in need.  Comic legend Bill Mantlo (creator of Cloak & Dagger, Rocket Raccoon, and author of many Marvel Comics of the 70’s and 80’s) is one of those creators.  One thing I’m sure every comic fan knows, though, is that work-for-hire is not always lucrative, and some of our favorite comics and superheroes were created by writers and artists who died penniless.  The Hero Initiative is a great cause, and you might want to think about donating the cost of a movie ticket when these big, blockbuster flicks that make Marvel/Disney millions to the REAL people who made that revenue possible.  Check out Bill Mantlo’s story HERE or check out the main page for the The Hero Initiative HERE for a better idea of what the organization does. 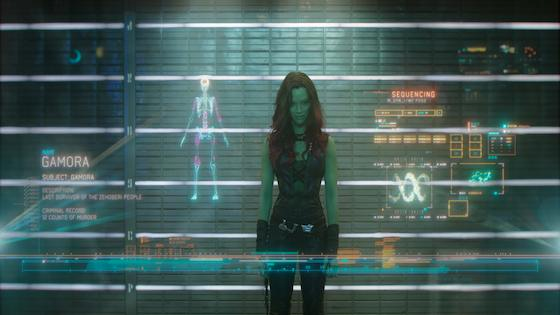 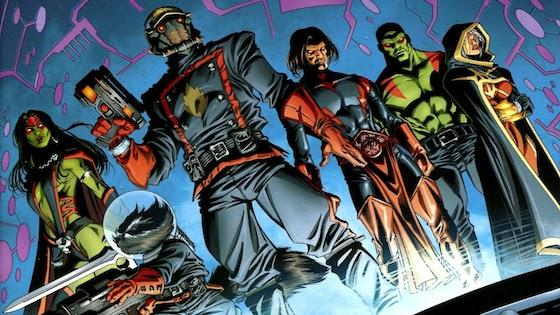 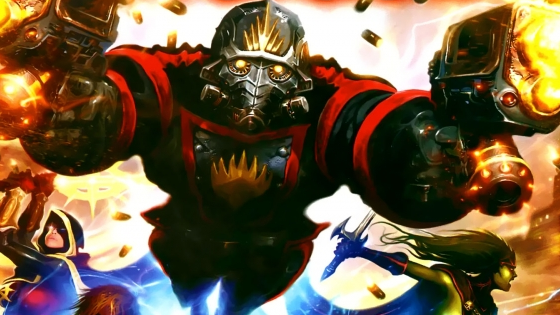 The movie team (as opposed to the various incarnations of the team in comic books) you’ll see is due in large part to creators Dan Abnett & Andy Lanning, who in 2008 rebooted the Guardians following the successful space-epic “Annihilation.”  Along with a couple folks you WON’T see in the flick, Star-Lord recruits the most dangerous folks in the galaxy to battle cosmic horrors.  This is where the fairly anarchic vibe of the Guardians sets in, as the volatile nature of the squad members leads to more chaotic interactions (they are even called the Dirty Half-Dozen).  Director James Gunn has said that if the Avengers are the Beatles, then the Guardians are the Rolling Stones.  That is definitely true of this incarnation of the team:  sexier, more dangerous, more fun.  More rock n’ roll.  This trade paperback collects issues 1-6 of this volume, but come July there will be a single volume collecting Abnett & Lanning’s run, which may be more to your liking.  You can also check out the Annihilation Omnibus, which is really the beginning of the reboot to “Cosmic Marvel.” 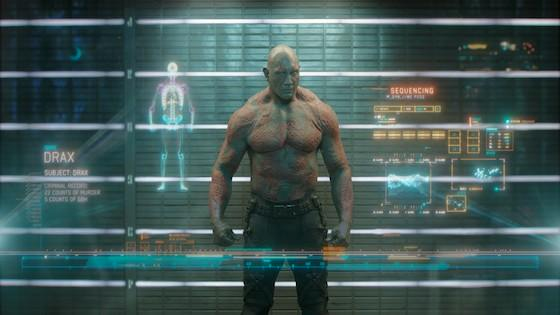 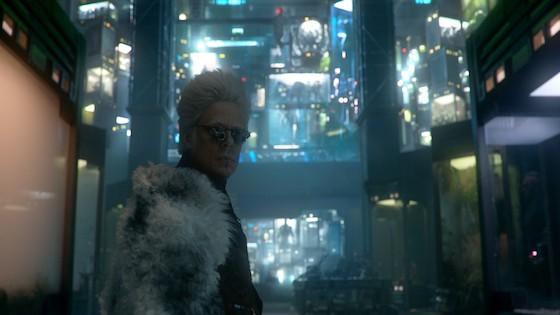 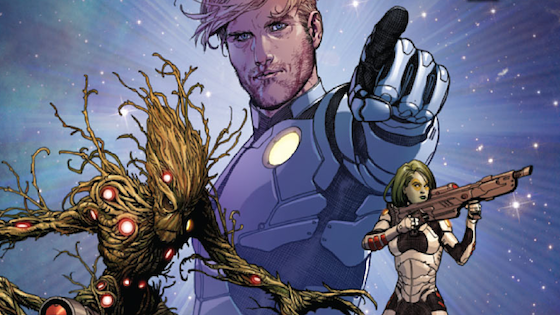 This newest incarnation of the Guardians is also, in my mind, a perfect example of what Jack Donaghy would call “synergistic product integration” or some other such business buzzword.  Not necessarily created to meet a comic market demand for more GoG, this volume came hot on the heels of The House of M (Marvel/Mouse) announcing a Phase 2 Guardians movie.  Helmed by Marvel titans Brian Michael Bendis and Steve McNiven, this interpretation of the team smoothed out the rough edges (especially those concerning Peter Quill/Star-Lord’s constantly changing origin story), and bringing the “core” movie squad together to be ready for the August 2014 spotlight.  Along for the ride is Robert Downey Jr., excuse me, Iron Man, who acts as an audience surrogate and helps readers become familiar with the team as he does.  While the first volume is under the deft artistic direction of Steve McNiven, future volumes that are drawn by Sarah Picelli are really where the book comes into it’s own, as Picelli has a gift for drawing fantastic alien worlds, cultures, tech, and truly giving the Guardians a look far different from a normal Earthbound Marvel book.

So there you have it!  A primer of sorts to get you on your way to understanding the Guardians of the Galaxy a bit better than before (if you’re a newb).  Let us know in the comments below if there are some particularly fun or informative Guardians stories out there to purchase that we didn’t mention (I am nothing if not alarmingly aware of my ignorance about most things).

Also, be sure and tell us if you grabbed anything released this week.  I wasn’t stoked by the titles released, and am always up for new recommendations.  If I had to recommend anything it would be the ZERO TPB by Image or the re-release of WE3 by DC/Vertigo.

Thanks for stopping in!