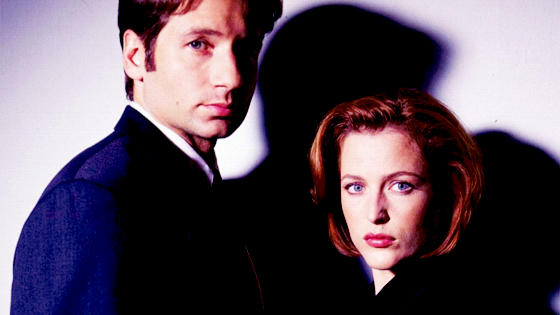 A couple of weeks ago I was yanking purple-tip to Almost Human’s premiere. It was jazzy, I was jazzed, my underoos were sticky but stern. (What does that even mean?) In the middle of my fluids-flinging, our own incalculably talented J-Hawtsauce pointed out that he had a hard time swallowing the episode orders that network television demanded. The good sir lamented the puffed-up nature that having to bring twenty-four (or so) episodes to bare every season can produce on a show.

At the time I claimed that I didn’t have a problem with what were essentially procedural television shows with a science-fiction tinge. After all, I love the X-Files, Fringe titillates me, and since I’m lazy and don’t feel like thinking I’ll nominate Battlestar Galactica as (a stretch of) an example.

Monsters of the week episodes rule! (Sort of.)

However, this isn’t a rebuke of Johnny’s stance. I agree with him: television shows that have shorter, more directed seasons are ultimately superior on a narrative level. Or maybe they have the potential to be? (That makes sense in my head. Essentially, a show with 13 episodes could be far tighter in its stories than one with 23 episodes, but that doesn’t mean the show with 13 episodes couldn’t suck more than one with 23 episodes. Jesus Christ this parenthetical remark is going on forever.) So let me say this before going further: Johnny is right. Especially after this week’s Almost Human. I enjoyed the episode, but it was the sort of filler episode following a long line of cliches that only seems to happen when…wait for it…you have to fill an enormous episode order.

What the fuck then, Caff! What the fuck! You yell, throwing beer cans filled with your own piss at me! Rocketing them off the Plexiglas of my cage, wondering if the impact of tin on wall shocks me. You can’t tell through the thick haze of feces and bile that I’ve used to paint portraits of Jennifer Lawrence across my prison’s cage.

What the fuck!, you continue. What exactly is the point of this column then?

I’m going to explain why I like (these italics are for you, Eduardo, you italic hating piece of shit) television shows that follow the monster of the week shows. True Believers (or haters, tired of my italics and my feces being spread everywhere and my fucking parenthetical remarks in this column), I like monsters of the week episodes because they allow my lonely ass (I am in a prison after all, and feces-paint takes a while to regenerate) to hang out in appreciable worlds, with characters I love, and serve as a cathartic mechanism.

They’re All My Friends! In a Cool World!

When you’re locked in a Plexiglas dungeon for fourteen hours a day (I’m let out to work and for dinner), you don’t have many friends. I have my frazzled foreskin (just kidding, my parents cut that off at least ten years ago), my poop sock, and my captors. So one of the reasons I enjoy monsters-of-the-week-procedural stories is that they allow you to enjoy the relationships that build over time. You know how it happens to be. The team of disparate parts slowly galvanizes over time, realizing that their synergistic mojo far outstrips the problematic portions of their relationships. If the characters are well written, you enjoy this metamorphosis. Slowly you feel like one of the gang. It’s enjoyable to be with them week after week, basking in their current case. Their dialogue. They realize that what they thought were insurmountable personal differences are actually the fodder for their bonding!

Oh! It’s so adorable. Like that time I thought my dingle berries were edible! I mean, they stayed down. Until the captor came to give me my food and a torrent of green, viscous fluid slapped up against his neck. “Isn’t it wild?! What luck!”, I said. I went for the high five. These sort of high jinks always end with a guffaw on the television shows.

Mine ended with the belt.

Furthermore, the appeal of this formula for me is doubled-down upon when the Universe they’re inhabiting is one of science-fiction and wizardry. Reality is boring (whether you live in a cage like me or one of those fancy houses you assholes talk about). Living in a cyberpunk world ala Almost Human or a world of multidimensional universe hopping like Fringe or one of conspiracies and aliens like in the X-Files, they’re fun escapes from the mundane nature of reality.

The second reason I enjoy them (typically on an unconscious level until I stop to think about it) is that their formulaic nature serves as a brief little morsel of gratification for my fat ape brain. I forget where I read it, but the article basically pointed out (in a far more succinct manner than I can) how procedural shows serve a specific function for humans. I must admit though that I remember very little these days. All the tasers I’ve taken to the balls, all the psychoactive agents they’ve made me ingest so that I stop scrawling “But she’s an angel!” in my own phlegm on the toilet seat, all the caffeine that has frazzled my nerves. I don’t remember much.

But I’ll try! For you guys!

Basically, the idea (and I subscribe to it) is that a procedural show is an hour-long exercise in catharsis. There is the problem. Generally a murder, or an alien fucking the goats again with their own horns. The team of witty people are brought in to crack the case. They struggle with it. They think they have the solution. Then they definitely don’t have the solution. The at about X:56 they solve the problem. The struggle has a bow put on it, and the viewer leaves with the sense that they’ve experienced an accomplishment on some sad, unrewarding level. ‘Cause most of our lives contain very little reward, closure, or catharsis.

(I’m probably butchering the application of that word and some fucking Ancient Greek scholar is pulling their pubes out in apoplexy. Fuck you. Leave me alone.)

Welcome to living in Capitalist Hell. Whatever. Shhh. Don’t tell them I’m blathering my Marxist nonsense about worker drones and the lack of actual agency in a 9-5 nightmare without guaranteed healthcare and the fluoride in the water. Oh god they hate that.

Anyways. It’s a neat little bow. Furthermore, it’s a needed break from the other sort of television that I enjoy. Heart-racing brutal examinations of character like Breaking Bad or Justified or Whatever Show You Love That I’m Not Naming (Calm Down) offer very little closure. Most of the time they leave you upset, disturbed, saddened, or in need of an enema (what?). I can only handle so many episodes of The Shield before I want to fucking kill myself.

So I supplement my Existential Agony diet with some Pretty Simple Procedural Swagger. They compliment one another for me.

I’m a lonely man, living in a lonely cage. I seldom get to escape it, and when I do it’s generally when I’m sent to the market for appraisal. I’m worth very little. You see. Very little. I’ll never be sold to the Space Pirates, and so they keep me in there for their enjoyment. How do I escape from this hole? Through the arts. But I can only experience the sublime with Byron so often. Or ponder my existence alongside Sartre before the nausea overtakes me. Procedurals serve a function for me. They’re a safety valve. For an hour I get to hang out with characters I enjoy, in a world I wish I could escape to, and solve a crime or murder or mystery.

It makes me feel good.