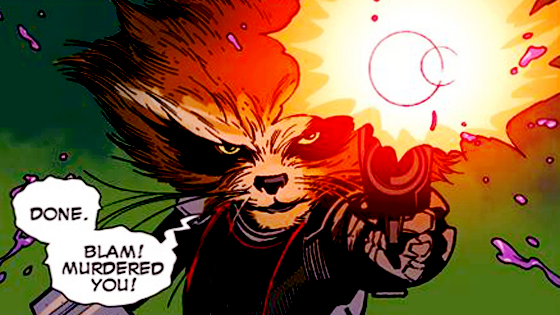 Chris Pratt rules. Andy on Parks and Rec? Wonderful. So I’m not surprised by his assessment of the characters of Guardians of the Galaxy, but I’m happy with it none the less. Dude is all about Rocket Raccoon. And why wouldn’t be? It’s a fucking gun-toting murderous raccoon.

The runup to big reveals from Marvel’s upcoming Guardians of the Galaxy, which recently wrapped its main shoot with James Gunn at the helm, is that we have only a vague idea of how some of the film’s ideas will come to life. We saw a reel at Comic Con that gave us a good sense of the comic adventure tone, but then there are some pretty wild elements. There’s the tree-man-alien Groot, voiced by Vin Diesel, whose only line in the film is “I am Groot.”

Then there’s the gun-toting Rocket Raccoon. Bradley Coopervoices the critter, but he’s not a merely meant as a cuddly ploy to drive merchandise sales. He’s an angry one, according to Guardians star Chris Pratt, and possibly the best character in the film.

You think it’s a cartoon character, but it’s not, it’s a very real creature. [Rocket Raccoon has been] tortured his whole life and no one else likes him, so he’s lonely and he’s angry and it’s like, [there are] all these elements [to the character]. You sort of forget about that, you wouldn’t think about, [and] hopefully will come to life. I think it will and that’s why they hired a really good actor to do the role. I could not be more excited that Bradley Cooper is voicing Rocket Raccoon. It’s a great character. It’s probably the best character in the movie, just because it’s not what you would expect.