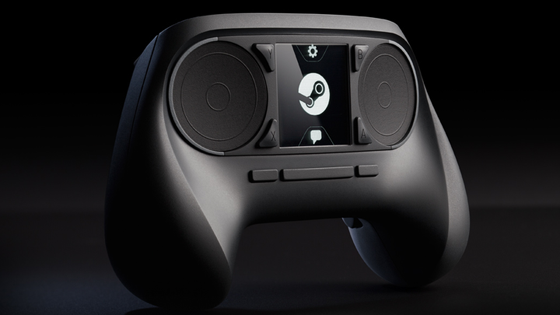 Valve ain’t fucking around, brolos! They’ve revealed their Steam Controller, and the son of a bitch is interesting. Ain’t got no analog sticks! Take that upside your conventional head. I’m intrigued.

Valve has designed a unique input device for computers: the Steam Controller, the company announced today.

Built over the course of the past year, the Steam Controller features no analog sticks; in their place sit two high-resolution circular trackpads for the player’s thumbs. The pads can be clicked, which allows them to also function as buttons.

“The trackpads allow far higher fidelity input than has previously been possible with traditional handheld controllers,” reads the announcement post. “Steam gamers, who are used to the input associated with PCs, will appreciate that the Steam Controller’s resolution approaches that of a desktop mouse.”

According to Valve, the Steam Controller’s trackpads are sensitive enough to allow entire genres of games that have, until now, been playable only with a keyboard and mouse — titles such as strategy games, simulations and other cursor-driven experiences — to be played on a couch with a controller. And games like first-person shooters will benefit from the finer control that the trackpads offer, Valve claims.

What trackpads don’t provide, however, is physical feedback. To remedy that issue, Valve built the Steam Controller with what it characterizes as a very precise level of haptic feedback that goes beyond the comparatively simple vibration mechanism that’s common to existing gamepads. The Steam Controller’s linear resonant actuators — one attached to each trackpad — are “capable of delivering a wide range of force and vibration, allowing precise control over frequency, amplitude and direction of movement.” The devices can also function as speakers.

While the face of the Steam Controller is dominated by the dual trackpads, the center hosts another touch-based input device: a high-resolution touchscreen. Like the touchpad on the PlayStation 4’s DualShock 4, the touch surface on the Steam Controller can be clicked in as a button; unlike the DualShock 4’s touchpad, it is actually a display. The touchscreen can be used for game elements such as pages of actions, a radial menu, a scrolling menu and a map. Users must click the screen to make a selection, and while they’re using the screen, its display will be overlaid on the television screen, so they don’t have to look at two screens at once.

The Steam Controller does feature buttons. There are 16 of them, half of which are accessible without having to move one’s thumbs from the trackpads; two of the buttons are on the back of the controller. The entire controller is symmetrical, so left-handed gamers will be able to use the device just as easily as right-handed gamers with a simple control flip enabled in software.

Even though the Steam Controller is a gamepad without analog sticks and traditional face buttons, it will be compatible with games designed for controllers as well as titles built for keyboard and mouse controls. Valve achieved this through a legacy mode that fools games into thinking a keyboard and mouse are attached. Players will be able to choose from popular configurations and share their own. And the Steam Controller is designed to be fully hackable, allowing users to contribute to the design of the device.