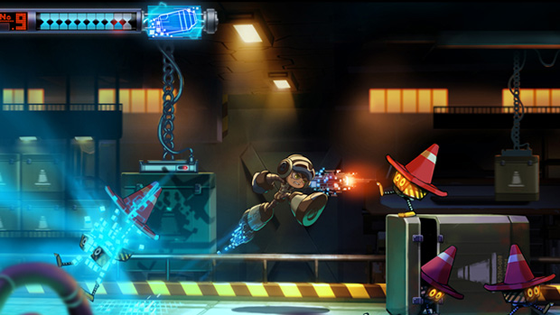 Keiji Inafune is leaning on us to help him out. Why should we lend a hand? The dude only created Mega Man. Now he wants to launch the spiritual successor to his iconic franchise, and it goes by the name of Mighty No. 9. The only problem? Dude needs like a solid milli. Milli buckos to get this fucker off the ground.

Mega Man creator Keiji Inafune hasn’t exactly made it a state secret that his final days working at Capcom weren’t great, and based on his newly announced blue bomber-esque game, Mighty No. 9, it looks like he’s taking satisfaction in getting back to his better days the only way he can: wholesale borrowing the concepts he himself created.

Announced just minutes ago during a panel at PAX Prime, Inafune revealed the game, being developed by veteran Mega Man alums for the PC, as part of a Kickstarter. As of this writing the project had already raised almost $12,000, just over a tenth of their goal of nearly a million dollars.

While not a whole lot is known about Mighty No. 9 just yet, it’s safe to say that this is basically the spiritual successor to Mega Man X, from the artwork down to what’s been said about the design.

If you want to donate to Inafune’s Kickstarter you may do so at the link below. Thankfully, since the Mega Manformula is his, we can probably expect this one to be better than Soul Sacrifice.