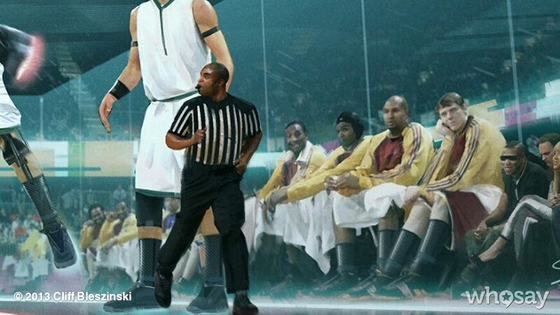 Just what the fuck is Dude Huge making here? Cliffy B has continued teasing a new IP, and frankly judging from the images dropped I have nary a clue as to the genre of the title.

The series of cropped screenshots tweeted this month by former Epic Games developer, Cliff Bleszinski, are all part of a new IP that he is working on, he told Polygon, with every screenshot teased part of that universe.

Earlier this month, the game developer tweeted the first screenshot, teasing a “sneak peek” at a project he is developing. The image featured an armed soldier standing in a river-threaded canyon, along with a military patrol boat in the foreground and a guarded military installation in the background. The artist who worked on the image is Shaddy Safadi, according to Bleszinski, a concept artist whose portfolio includes Naughty Dog’s The Last of Us.

The latest “cropped” screenshot, tweeted yesterday and pictured above, features a glass-walled sports court. One of the several towering cybernetic-looking players, given the scale of the referee, is equipped with what looks like a jet pack and leg struts.

Polygon reached out to Bleszinski for further information about the new IP.