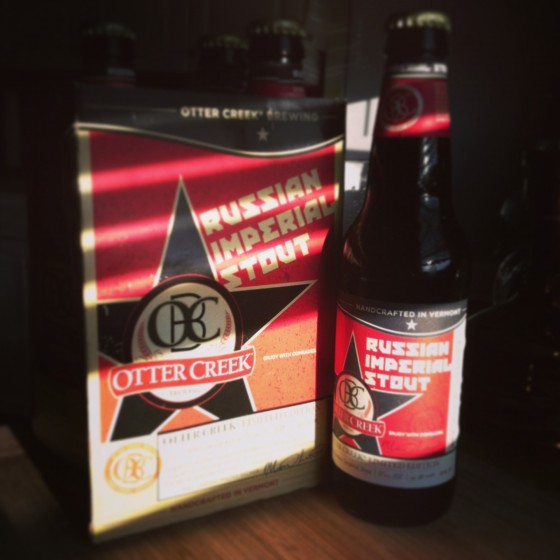 Remember that time Napoleon rewarded Boxer’s ceaseless efforts with a trip to the glue-factory? Or how about when Grand Moff Tarkin blew up an entire goddamn planet? And who could ever forget when the children of Panem murdered each other for entertainment?

The reason that all of this wonderful brutality occurred was because those in power didn’t have to justify their actions. Without checks and balances, these motherfuckers were able to do as these pleased, whatever the consequences. And although freedom fighters occasionally inspire resistance, there are still plenty of totalitarian forces at work today.

Even in the beer world.

Tonight I’m drinking a limited edition Russian Imperial Stout from the folks at Otter Creek Brewing. Having had my interest piqued by the Soviet-styled design on the label and box, I wanted to learn more about this stout. Hell, I even compiled a list of questions. But when I went to the brewery’s website, I was greeted by nothing more than an “under construction” declaration and the encouragement to visit the Otter Creek Facebook page.

Thanks but no thanks, Otter Creek! I haven’t been on Facebook in years, and I ain’t fallin’ for your ruse! It’s pretty obvious what’s goin’ on. The Otter Creek Elite wants me to join Facebook and “friend” them, and then they’ll monitor my beer-drinkin’ habits (via status updates and photo evidence) to target me more directly! Before I know it, Otter Creek shadow agents will be infiltrating the parties I throw, telling revelers about the newest promotions available from a beloved Middlebury, Vermont brewery.

In addition to not answering any of my questions, Otter Creek also fits my haphazardly-sketched authoritarian-paradigm by taking absolutely no prisoners. Having thrown back a bottle of Russian Imperial Stout, I can say that it’s bound to decimate the faint-hearted beer-drinkers in our midst. By launching a multi-front assault, this brew is a challenge to even those of us who consider ourselves experienced in the game of hops-and-suds. So if you’re of the ilk that thinks regular Budweiser is too darn heavy, then please keep an eye out for this Russian Imperial Stout.

Cause if you don’t, you might wake up in pool of regrets.

So how exactly does Otter Creek’s Russian Imperial Stout carry out its clandestine operations? Well, first there’s the pour. This stout settled in my glass as nothing short of blacker-than-black, with no absolutely no light penetrating through. On top of this liquid abyss was a head creamy in texture in tan in color. To those who’re used to translucent beers topped with a smidge of white foam, this may very well cause a heart attack-ack-ack!

In the smell department, this stout smacks a billy-club across the unsuspecting brew-drinker’s sternum. Taking a whiff from my glass, I immediately detected dark malts and alcoholic vapors (no doubt attributable to the 10% ABV). Sniffing further, my nose was able to pull out the hints of chocolate and even some coffee notes. In the best way possible, this stout smells like a boozehound who’s passed out in a coffee shop after eating a box of chocolates he stole from his sister.

So how does Russian Imperial Stout silence the dissenters? Well, by swooping in with a truly powerful drinking experience. Despite being so alcohol-heavy and dark, the mouthfeel is medium-bodied. This, in turn, creates a deceptive drinkability that warms both heart and face at an alarming rate. Even with this foreknowledge, it’s hard to resist the wonderful flavors contained in each bottle.

The first sips clobbered me with roasted malts and Stygian sweetness. During the next few tastings, I couldn’t help but fixate on the fact that the elevated ABV revealed itself in the most timid of fashions. From here, I finished off the bottle while uncovering a smokiness that suggests the stout’s potential as a BBQ marinade.

So even though I thwarted Otter Creek’s attempt to monitor my actions via Facebook, I could not defend myself against the covert agent that is Russian Imperial Stout. Although the drink is marketed as limited edition, these Vermont brewers could easily maintain control over the Easy-to-Drink Stout Realm if deploying it on a regular basis. Beautiful to the eye, warm to the nose, engaging to the taste buds, and intoxicating to the brain-bone, this is not a beer to scoff  at.

Viva la resistance! But until then, drink up! B+