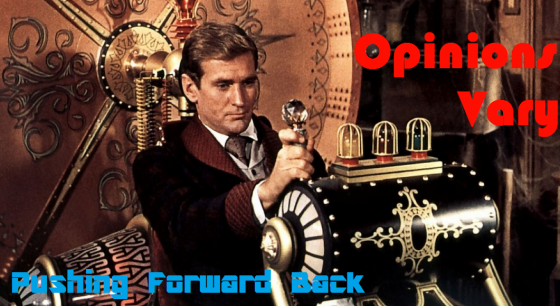 If you folks are anything like me, you’ve often thought how cool it would be to have super powers.  You also love avocados.  However this Opinions Vary has nothing to do with super powers … avocados might play into it later on.

This week’s Opinions Vary is about Time Travel.  More specifically, where would I like to visit in the sands of time?  Hit the jump and let’s do this thing.

The first question we need to tackle is forward or back.

If I go forward, I am seeing the future of the current present.  I am accepting that what we are doing now will drive the course of humanity towards whatever point I pop out of in the time line.  So let’s take a look at society today.  Half the world’s population lives in squalor, the other half masturbates in front of a magic picture box, there are threats of terrorism and war constantly, tensions are running high in even the most peaceful of countries, reality TV permeates civilized culture, and the McRib is only seasonal.  It is truly a terrifying time to be alive.

Now go forward a couple hundred years.  Have we sorted our shit out or did we nuke ourselves back to the Stone Age?  Or did we sort our shit out with nukes?  Do we still use oil?  How is space travel coming along?  Do we have robot bodies yet?  All these along with the hundreds of other questions I would be asking like a country bumpkin fumbling around in ignorance.

In short, the future would be terrifying and confusing.  Imagine a time traveler from the 1500’s landing here in 2013.  My dad was born in the 50’s and he just got the hang of a VCR despite it being a dead technology.  So what the hell is this ignoramus going to think when he sees the other cool shit we have?  Imagine his shock to find out that the colonies broke away from the British and then became a super power.  Hell, just filling him in on the last 500 years would take the rest of his life.  It would almost be a waste of time.

That is why I would prefer to go back in time.

The next decision to make is the when.  I’ve often though how cool it would be to go back to the Revolutionary War with a Barrett .50 cal and a crate of ammunition.  I thought it might be fun to take a nuclear submarine into the early 1800s and sink some slaving ships.  I’ve even thought of heading back to the Renaissance and throwing some colors together on a canvas and express that people simply “don’t get it”.  All those have their own unique perks.  However, my final destination is clear.  Ancient Greece.

I am obsessed with how things work.  I like to know the “whats” and the “whys” of it all.  From a simple cigarette lighter to a large atom smasher, I’ve read about what makes things work.  So now in ancient Greece, I would put that knowledge to use to jumpstart civilization by a few thousand years.  I’m not as arrogant to say that I would arrive at 9:00 am and have a computer built by lunchtime.  I would start a little slower.  My first “invention” that I would use to amass a fortune or notoriety would be the bicycle.  The bicycle is an easy enough device to manufacture in antiquity, and would have a practical application to those who inhabit the world.  If I had invented something like the gun, or even just gunpowder, I would have more than likely been thought a wizard and been killed for harnessing forbidden magic of the gods.  So that’s why I would start with the bike.

Assuming that did indeed bring me fame, I would then work on both the hot air balloon and steam power.  I have working understanding of how both of those technologies work, and would use them to further both my position and the world’s understanding of science.  My knowledge of cartography and geography would be invaluable to make contact with other civilizations and bring them into the fold.  Once I have been established as a scientific badass, I’d go to work in the field of medicine.

I can name the parts of the body; tell you where they are and what they do.  That alone would make me the most qualified surgeon on the planet.  Now that’s a scary thought.  Also, I would be able to introduce to the world the knowledge of diseases.  By upping the amount of sanitation at an early enough point, we could avoid mass plagues and save lives.

I’m sure at some point I would back off, buy an avocado farm, and let the minds of the times run with the knowledge I have given them.  But until that moment, it would be a very cool and fulfilling existence.

So what would you do with time travel?  Be a Doc Brown and try to help mankind understand itself?  Or go all Biff Tannen and buy a sports almanac from the future?

P.S. Yes the title of this article is a reference to the Temple of the Dog song by the same name.  +5 internets if you knew that.