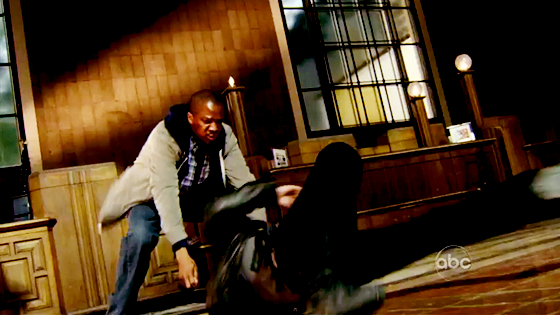 J. August Richards can be seen in the trailer for Agents of SHIELD whupping some serious ass. Dude is sporting super strength, as well as invulnerability. So who is he playing? Opinions are split, but some are thinking he may be Luke Cage.

Here’s your daily dose of Marvel Cinematic Universe speculation: Some circles believe that Angelalum J. August Richards could be playing as Luke Cage in ABC’s Agents of S.H.I.E.L.D.

The speculation stems from the actor’s two appearances in the Agents of S.H.I.E.L.D. trailer. It’s clear that whatever character he’s portraying has special abilities, namely super-strength and super-invulnerability. Entertainment Weekly notes that those are two of Luke Cage’s qualities as well. Add that Richards is shown in one scene wearing yellow (-ish) pants, a possible nod to Power Man’s 1970s yellow-and-blue outfit.

But that’s not the only potential character Richards could be playing. Chris Radtke pointed out that, thanks to a clue from the Marvel bumper at the beginning of the Agents of S.H.I.E.L.D. promo, Richards could be Rage of the New Warriors, not Luke Cage. Of course, Richards may play someone else entirely, but these are the two most popular theories, with the former explaining whythe role was initially characterized as “super top-secret.”

If Richards is playing Cage, this wouldn’t be the first time Marvel tried to integrate the character into one of its TV projects. The failed AKA Jessica Jones series was supposed to feature Cage and Carol Danvers as supporting characters. Writer Melissa Rosenberg opened up about Cage’s inclusion back in 2011.

“It’s very tricky navigation there,” she said of using characters from the Marvel Universe. “There are a lot of boundaries on who you can and can’t use. I had Jessica Jones and Luke Cage and Carol Danvers [for the pilot script]. Basically, I wanted those three guys — then I would have a series. Everyone else we can be digging into lesser-known characters or taking known characters and renaming them.”