Archives
« Abrams expects JOHN WILLIAMS to drop the tunes for ‘STAR WARS: EPISODE VII.’ G’damn right.
Source: MICROSOFT SIX MONTHS behind where they want to be with NEXT XBOX. Duruhroh! »

THIS WEEK on Game of Thrones: “Kissed By Fire” 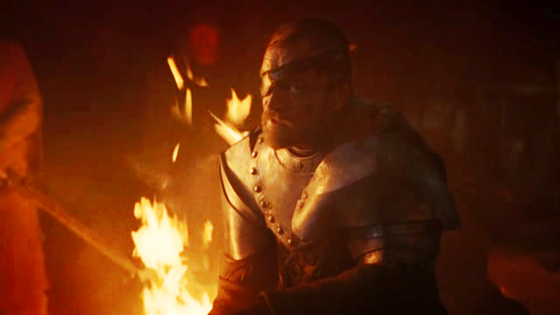 Game of Thrones has been kissed by fire in Season 3 – ratings are at a series high, and it’s easy to see why. The escalation all year has been almost out of control – new characters almost every week, new fantasy elements (to some viewers’ dismay), and new plots that aren’t in line with expectations.

The fifth episode’s title, “Kissed By Fire” is culled from a quote from red-headed wildling Ygritte, in reference to the boy that deflowered her. Red on red, as it were.

It’s a phrase very easily applied to half of Westeros, as well. The country is ravaged by war, farmlands are on fire, the religion of the Lord of Light and its affinity with fire are slowly creeping into all parts of the land, and Dany and her dragons have charred a city, and are marching to another.

And then there’s Beric Dondarrion.

This fool has had less than ten minutes of screen time and already reach maximum swagger allotment. It may have something to do with his pocket priest, Thoros of Myr – a red priest, not unlike Melisandre, Westeros’s resident shadow baby factory. 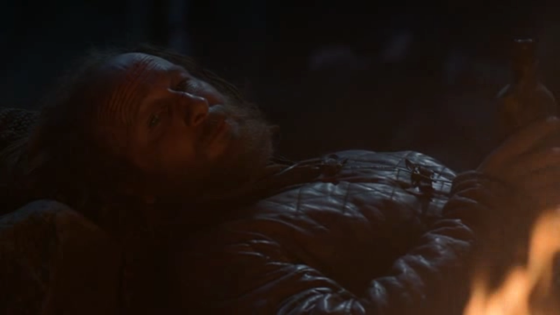 Instead of bringing forth an assassin, Thoros brings forth a second lease on life; invoking the same god as Mel, he’s able to resurrect Beric from death. It’s happened six times now, and Beric has the scars to prove it. 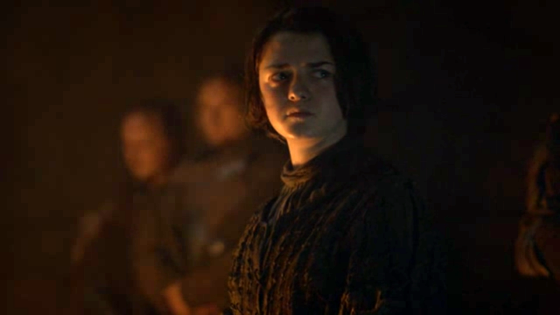 Arya, in one of this episode’s uncountable devastating lines of dialogue, wonders aloud if this gift of life could be bestowed upon her headless father. Alas, no. But it begs an important question: in this bold fantasy world, where death has proven to come swift and merciless when least expected, is that death now neutered?

Not really, says Beric. “Every time I come back, I’m a bit less.” There is still a price. He’s already forgetting how he died.

But this may yet prove the fantasy element of Game of Thrones that will be the hardest to swallow for fans. Zombies, dragons, face-changers – it’s somehow all good, until we have something as potent as resurrection. Why does this particular fantasy element seem to resonate more…offensively with viewers? Or am I just encountering anecdotal resistance among my friends and fellow viewers of the show? You tell me in the comments below! 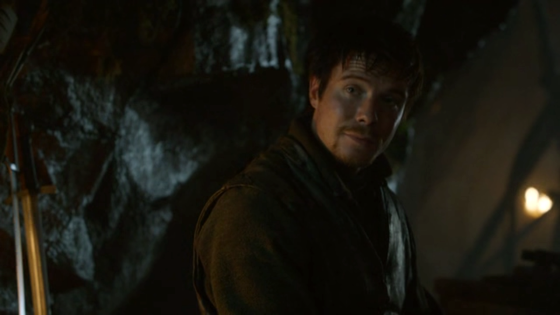 Beric may be a lousy fighter, losing out on life six times now, but he still seems to inspire a considerable amount of heart and confidence in his Brotherhood. The Brotherhood Without Banners, to be precise. Free, following a leader by choice. This intrigues Gendry; he’s going to stay put. Alas, farewell Mr. Abs.

Hopefully, Mel’s hint from last week, that she was setting out on a quest to find more king’s blood leads her back to Gendry. After all, the show’s made an enormous deal out of positioning the boy as Robert Baratheon’s only true biological heir. The story can’t be done with him yet.

There’s a beautiful simplicity to some of the dialogue in the episode this time. Quick little turns of phrase that use so few words to illustrate so complex a picture.

After reciting her expansive ‘death list’ before the flames, such a conversation occurs between Arya and Thoros, proving just how keen and observant Arya is:

Thoros: “Don’t think of it that way.”

Simple, quick turns of language, to vividly illustrate all the intricate nuances of a complex situation.

I don’t know if these fun bits of dialogue should be credited to the script writer here, or to the original text and Martin; either way, they’re phenomenal. Fun ways of questioning and reversing everyday phrases. 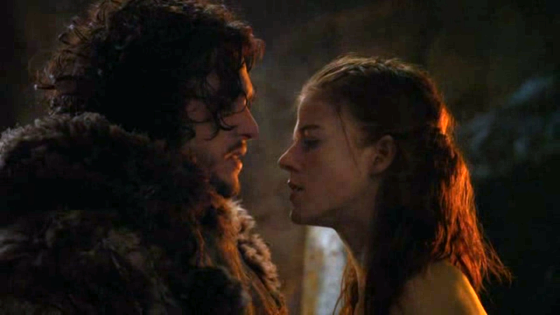 Jon breaks a second vow in service of a larger one.

Again, simple dialogue. On the act of forbidden love:

Jon, with a worried brow, the tired old phrase: “We shouldn’t.”

Ygritte, with arousal, concern, and legitimate desire: “We should.” 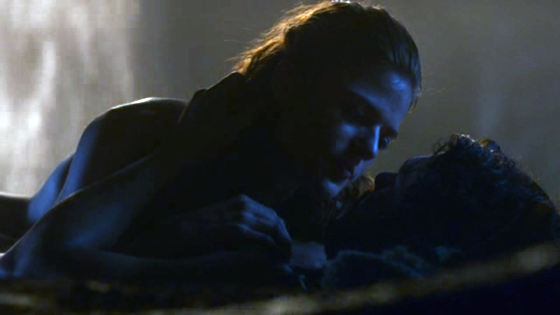 So that happens. Ygritte is firmly on Team Snow. That’ll matter if Jon really is still true to the Night’s Watch in his heart. And if he is, Tormund’ll be ripping that heart out if he gets the chance. A favorite image from that interplay: 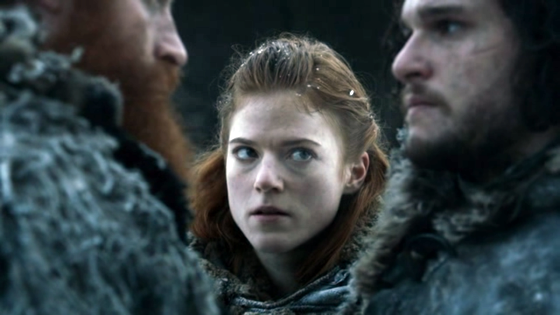 I don’t have to say too much about Jaime and his stellar turn this week. The actor, Nikolaj Coster-Waldau, savaged my expectations – I knew the man would deliver in some of these scenes, but not this well. I’ll let everyone sound out below, but damn, this week was something special for Jaime. 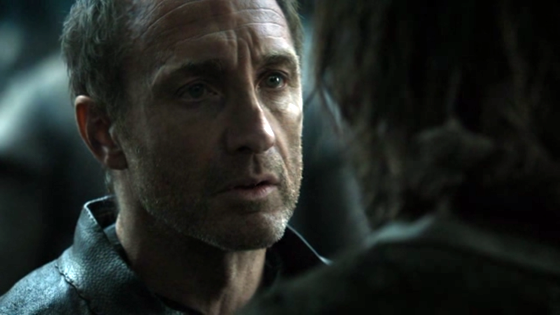 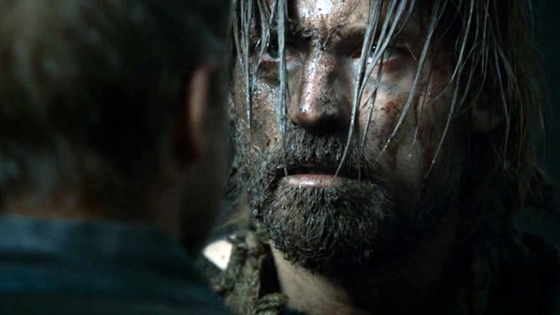 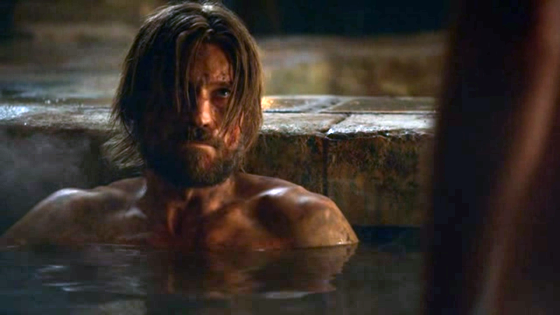 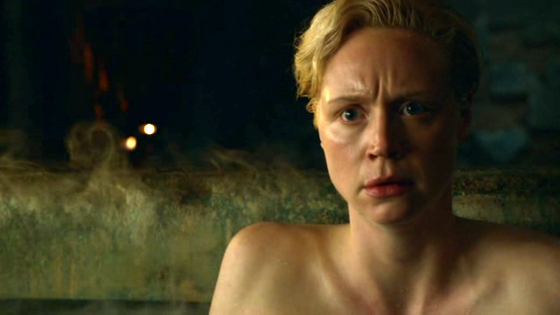 Across the country to King’s Landing: 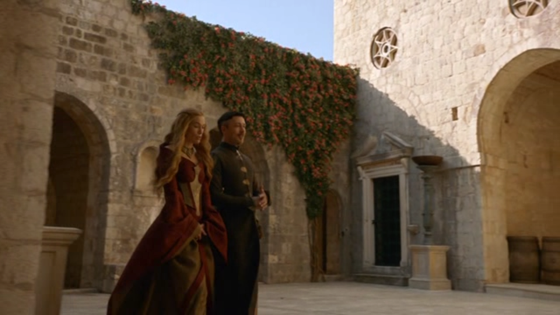 Cersei speaks of a Tyrell threat? Look at the roses creeping over the wall into King’s Landing. And what’s the Tyrell’s sigil? A rose? You don’t say! 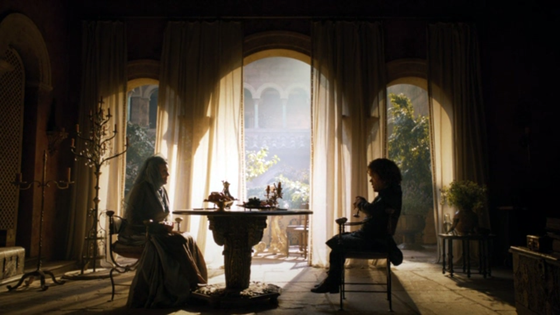 Lady Olenna Tyrell talks of figs and bowel movements; it’s not just HBO delighting in going over the line or a bid for stark realism. It’s really framing Olenna AS a realist, and someone who isn’t afraid to get right to the point. She frames the war’s cost in real numbers. Then chips in. Joff’s wedding is happening soon by the sounds of it. I’d imagine the season builds to it, and Tyrion seems to be the only one who cares how much it’s going to cost. 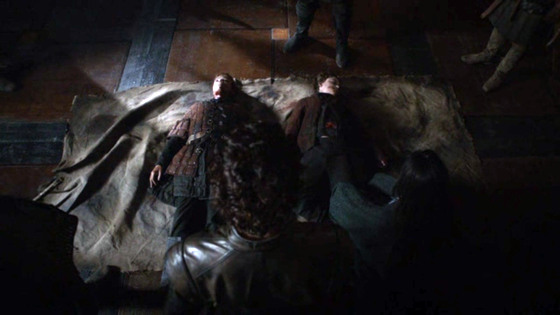 What’s it going to cost Robb to keep his army together? Two dead Lannister hostages demand a response: 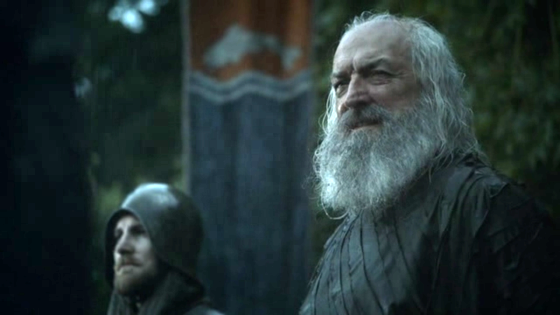 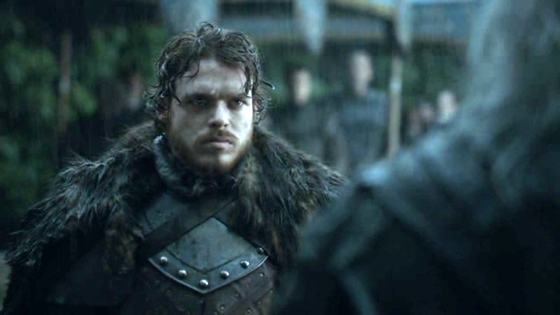 Robb’s being forced to make some brutal choices. His story directly parallels Theon’s last year. A forced execution, to maintain order among his men, he has to prove himself, in the rain, with the same emotional theme burning up the soundtrack as Theon was forced to take Rodrik Cassel’s head.

“Kill me and be cursed,” spits out Karstark as Robb takes his life with one stroke.

Catelyn doesn’t even blink as her son does what we first saw Ned do two years ago. With all the advice not to take Karstark’s head pouring in, Robb doesn’t blink either, and does what he feels he needs to do.

It loses him half his army. He needs another one.

Robb hatches a new plan to go west and take Casterly Rock; he just needs the last army left for him to claim; Walder Frey’s. He’s going to have to confront the man associated with the oath he broke.

And speaking of broken armies… 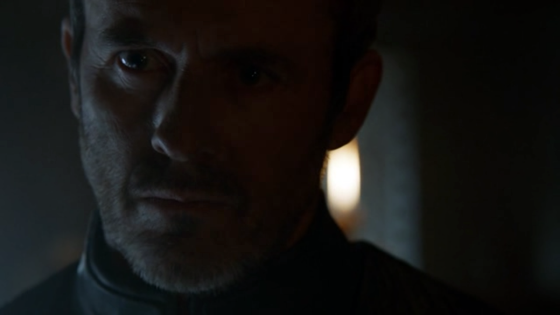 Oh yeah, Stannis. This poor sod’s still floating around somewhere on this massive chessboard. He’s got Mel out on some kind of mission, Davos locked up in a cell for threatening her life, and two more characters veritably locked up at Dragonstone who we’ve never met before. 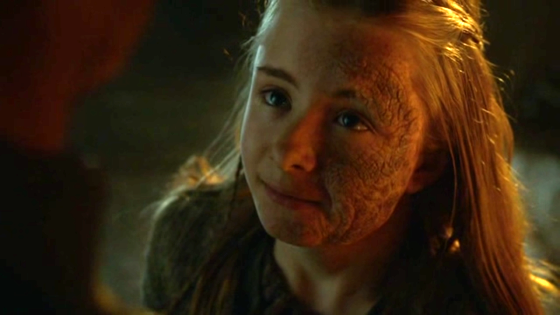 Shireen Baratheon has the honor of being the only child to make it out of Selyse’s womb ‘alive’. The others, all boys by the sound of it, are pickled and preserved in Selyse’s private observation lounge below. 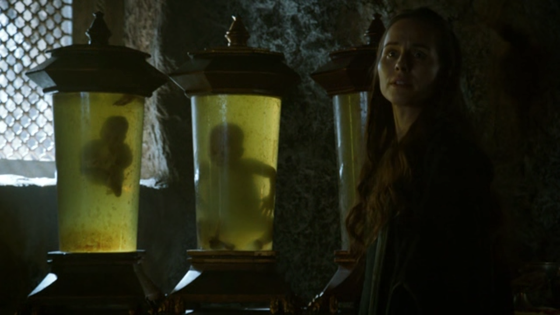 Thanking the red god, the lord of light, for bringing Mel to them, Selyse, Stannis’ wife is grateful that he has a son. I assume she speaks of the shadow assassin that took Renly’s life, but we can debate that.

Or more isn’t than is?

Selyse seems only too happy (or blinded?) to let Mel bring the red god into Stannis’ life, even if her definition of a son is questionable.

And what of Stannis? Is the poor man’s seed so corrupted that it produces only stillborns, shadowy death and a girl whose body seems to be claimed by some kind of scale disease? We don’t have all the facts, but things aren’t rosy in this king’s world.

And for the rest of this episode’s whirlwind tour of the Thrones world (seriously, we seem to go everywhere this week except to Theon and Bran), we quickly check in with Dany and company outside a new city shown in the opening credits, Yunkai: 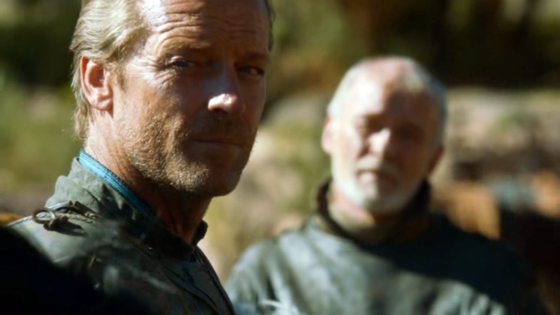 And it’s impossible to keep the man-tears in check as this line gets delivered from advisor number 3, Grey Worm: 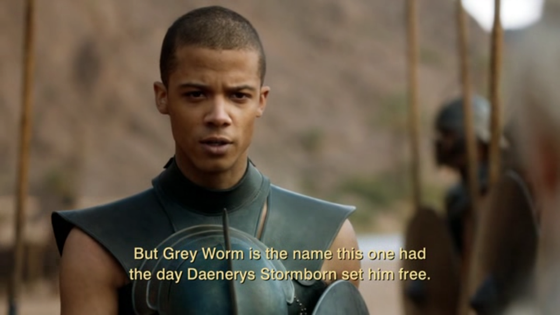 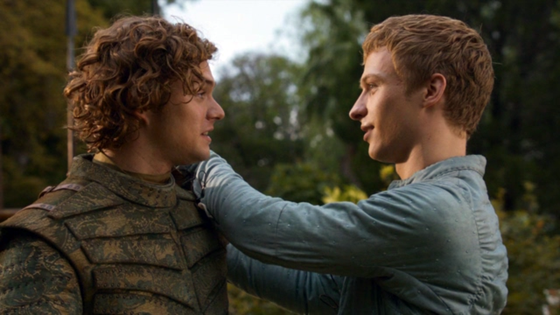 Oh. Yes! Loras is a happy man today! The Tyrells plot to marry him into the North, AND he gets a handsome squire to muck around with in his bedchamber?

But it’s just another plot. 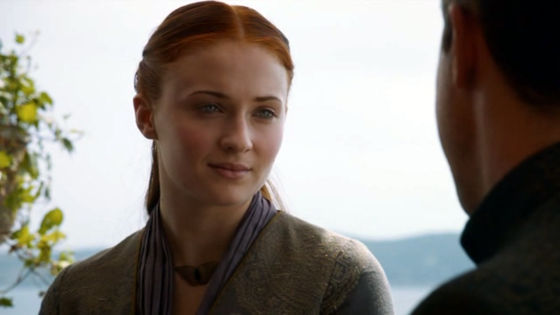 Petyr seems to average about two thousand strings pulled per episode. We’re just fortunate we get to see him pull one every now and then. Cersei has him working to discover the Tyrell plot, but good old Littlefinger is always looking out for himself, too. Unable to endear himself to Cat, his childhood love, it’s hard not to notice how much he’s trying with Sansa. And then, as of last week, we know he’s off to try and wed Lisa Arryn, Cat’s sister. Petyr’s all up in the Tully family tree!

The next and final scene changes everything. 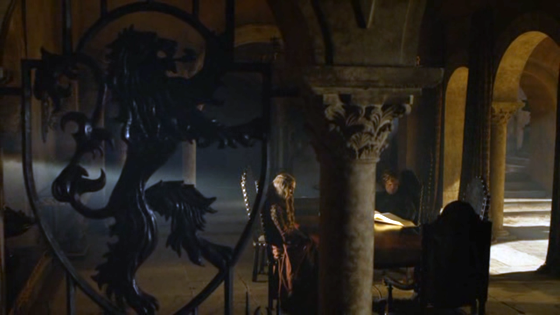 Sansa is so out of control of her destiny; now, the Lions plot for her to marry Tyrion. Sansa has become one of the chief pawns in the game of thrones and she’s as oblivious as ever. 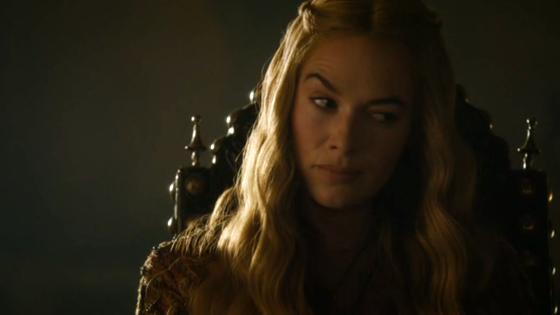 “Father don’t make me do it again”, says Cersei. She’s just a device to breed future royal children. Tywin doesn’t give a shit.

He’s playing the game better than anyone.

Where in the world does Cersei sit now on the Thrones totem pole? One week on, one week off, with Tyrion usually outsmarting her. This time, they’re both left dumbfounded.

This show is fast becoming dense. Whatever dense was, this show is denser. Dense isn’t even the word anymore. It’s out of control. Is everyone else keeping up?

Let me know what you all think below!

Budrickton, First of His Name, Warden of the Actual North (Canada)