This Week On The Walking Dead: Arrow on the Doorpost

Two universes collide in this week’s Walking Dead 2min Redux!!! Rick and the Govna meet in a battle royale of who can capture the most smoldering intensity in a single scene. Our two favorite sweaty hairy egos match wits at the negotiating table, in a last ditch effort to avoid the carnage of total war. What’s it gonna be? Will cooler heads prevail? Find out plus more after the jump!!!

Ok here we go. This episode had the power to be incredibly compelling, but fell way short of the mark. RICK and THE GOVERNOR MEETUP? Are you kidding? The sound of it makes my dick tingle. But as we saw this week, the idea is a lot better than the execution. This has become the hallmark recipe of the show:

1. Come up with a semi-decent concept.
2. Diarrhea all over it.

So Rick and the Governor meed up. They banter for 45 minutes. Nothing else really happens. That’s what I saw, and I watched it twice. Rick came in with real solutions, the Governor came smiling, and hiding a gun behind the table that he never even used. Lame. He demanded Michonne be turned over to him as the only solution to peace. Rick tries to reason with him, appeals to his ego. But he will have nothing of it. I mean that’s pretty much the whole episode.

The high point of the whole malaise was Andrea being put squarely in her place by all parties. It was fun to see hero and nemesis ban together, to tell her to STFU. She finally realized the Governor is evil 7 episodes too late. Stupid. Beyond that, Hershel and Daryl bond with their Woodbury dopple ganger archetypes. That was the best subplot of the mix. The others of Merle just being a dick head, and Glenn coming of age, and then getting laid were all pretty blasé. Time fillers mostly. That was about it.

In my world, they would have focused less on the bravado political bullshit, and dedicated the next 3 episodes to a 3 hour long all out total war!!! Make it tactical, add surprises, and plot twists. But focus on the battle. Don’t focus on the over the top diplomacy, and painful dialog that makes me want to scratch my eyes out. You spent a whole episode getting guns. Let’s shoot some shit!!! Make their meeting erupt in a gun fight, and let shit get out of hand. It all feels so controlled and contrived. Too guided by the story in the comic in the wrong ways, and too editorial in others. It’s hard to explain. But there is a creative constraint here, that is almost palpable. Everything feels so middle of the road. ALWAYS.

Anyway I read somewhere they get $2.8M budget per episode. Just sayin.

Rick and The Governor first meet…

RICK: Fuck that noise. I know what you did you son-of-a-bitch.

ANDREA: Hey guys. Am I interrupting? We can totally work this out if we just band together and–

ANDREA: Boo hoo hoo. They were soooo mean to me. I just want to bring everyone together. Give peace a chance.

MERLE: I can’t stand my baby brother being out there. I’m going to leave and go kill the Governor. Blah blah blah.

Meanwhile back at the negotiations…

RICK: You’re a dickhead. When I was Sheriff, I used to eat pieces of shit like you for breakfast.

THE GOVERNOR: You used to eat pieces of shit for breakfast?!? Ha! My intelligence tells me you totally blew the whole Shane situation last season. You suck as a leader and blah blah blah.

MARTINEZ: Check me out B. How sick is my bat game yo?

DARYL: Not bad. But not as nice as my hillbilly skillz.

DARYL: Where did you learn that though? You ex military?

MARTINEZ: Nope. My family got eaten by zombers.

GLENN: I’m sorry I was being a dick after the Governor dry-hump raped you. I totally get where you are coming from now.

CARL: It’s cool Glen. Will you do me in front of the zombers? I want them to watch us.

Meanwhile back at the negotiations…

THE GOVERNOR: Well think about it a couple days, and we can meet back up here, for a — uh meeting.

BOTH PARTIES: Peace out bitches.

THE GOVERNOR: I told Rick we just wanted Michonne. I am a master negotiator.

THE GOVERNOR: In two days when they show up, we will kill them all. Hahahahaha. Those dumbasses will never see it coming.

RICK: Something is fishy here. Why would the Governor invite me back in two days? Hmmm. Do you think he maybe plans to murder us all?

RICK: Allright pack it in. I need to do me some thinking.

RICK: I don’t know what to do Hersh. I like Michonne, but I don’t want everyone to die because of her. Derp. 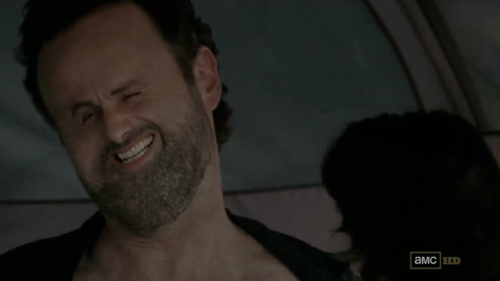 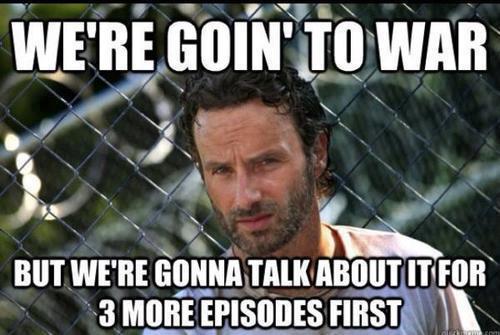 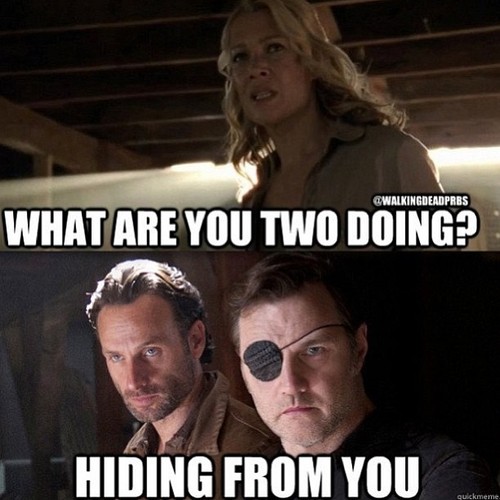 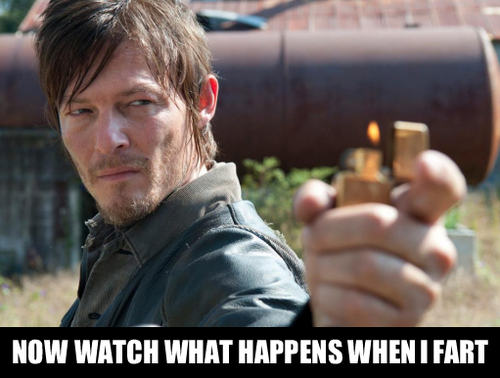 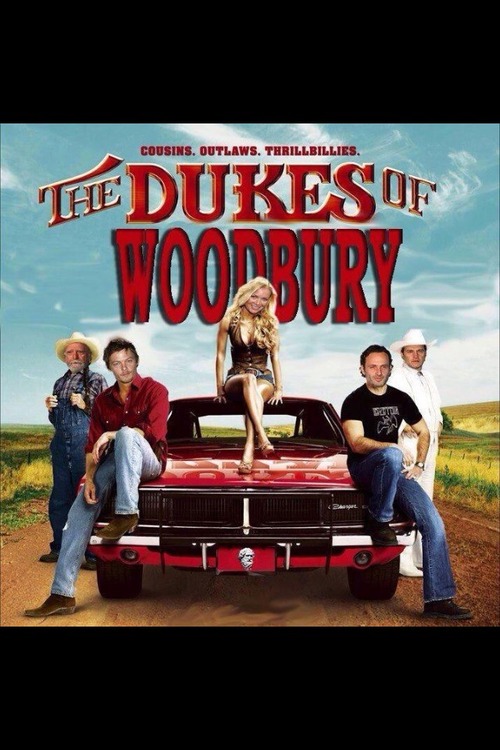 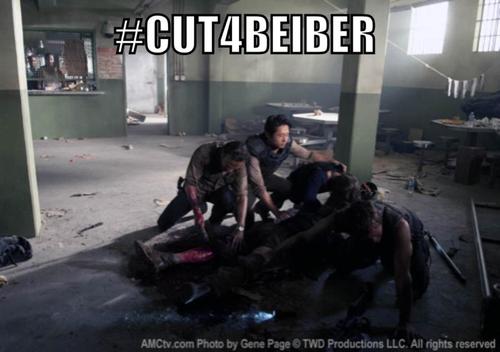 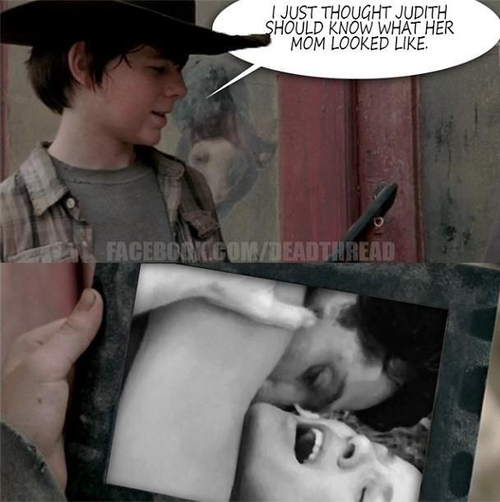 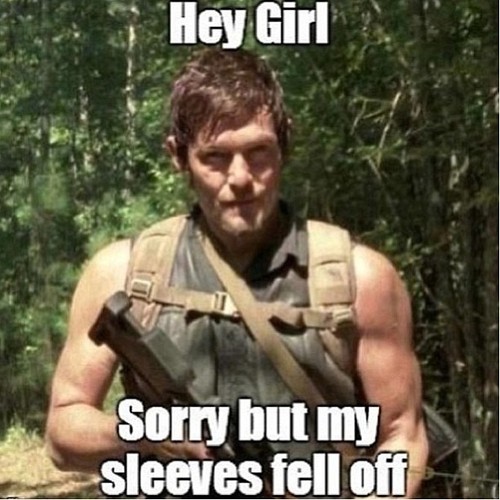 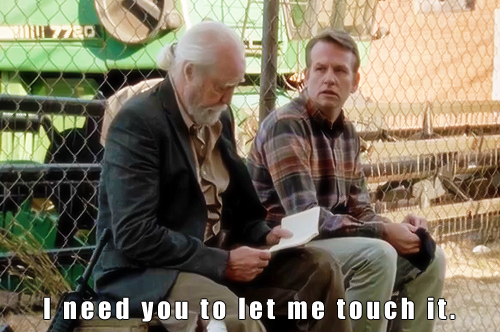