This Week On The Walking Dead: I Ain’t No Judas

Howdy ho survivors! It’s time to saddle up for another Walking Dead 2min Redux! This week is a curb-stomping good time, as Andrea goes full on Pocahontas in her quest for peace and goodwill. But are her diplomatic skills enough to prevent all out total war? Find out, as we soldier on through another jaw-dropping episode after the jump.

This week was pretty yawntastic. Andrea, the longtime second worst character on the show (save Lori), is making an ambitious attempt to fill the power-vacum of stupidity left by Lori’s death. She just seems to have terrible instincts when it comes to men. If you remember, she was the one falling in love with ol’ crazy Shane back in the day. Now she is bedding up with the most awfully awful character on the show: The Governor. This is quite a deviation from the comic, in which Andrea is actually a badass chic. This week she tries to play diplomat between the warring communities. It’s pretty dumb. She is pretty dumb. Dumb, dumb, dumb.

Meanwhile, ol’ Merle has found his place at the prison, and was forgiven pretty quickly for his atrocities under the Governor’s command. Whatever. Other than that, not too much to report. Still don’t know why everyone let Tyrese and them leave just because Rick had a crazy spell. Totally should have brought them in to help fight against the Governor. Stupid.

Lastly, I had a thought the other day. What if HBO had picked up this show instead of AMC? Probably would have been a lot better. Even so, the show is by far the most popular on television, particularly with young people. I read about it this week in the WSJ. Anyway, enjoy the show.

I Ain’t No Judas

We start out at the prison…

HERSHEL: Don’t you dare turn your back on me boy. We still need to talk about a bunch of shit.

HERSHEL: Merle is kind of a badass, plus you kicked those other dudes out last week. We should probably keep him as an enforcer, despite the fact he tried to kill our whole crew like 2 weeks ago.
2 seconds later…

CARL: Daddy, I don’t think you should be leader anymore. You are crazy now and stuff.

RICK: Noted. Thanks for speaking to me like a man.
Meanwhile over at Woodbury…

ANDREA: I heard you went over to the prison, you lying asshole.

THE GOVERNOR: Had to. But did you hear they shot at us while we were there? Your friends are such assholes.

ANDREA: What? I need to go talk to them. I will get to the bottom of this.
2 secs later…

ANDREA: Sup Martinez? What’s all the commotion about?

MARTINEZ: We are building an army, DUH!!!
Back at the prison…

HERSHEL: We’re not to different, you and I. We both know the bible by heart. Derp Derp. We welcome you with open arms now, Merle.

MERLE: I’m sorry I tried to kill you, Michonne. Please forgive me.

CAROL: I sure missed you Daryl. So glad you came back. You can hit this any time you want. Derp derp.
Meanwhile back at Woodbury…

THE GOVERNOR: Good. Help her escape. I want to see where this goes.
Milton & Andrea head to the prison…

ANDREA: This will be easy. I have seen Michonne do it like a thousand times.

ANDREA: Milton, hold him down while I do the dismembering. I’m such a baaaaad bitch.

ZOMBERS: Wait a minute. Can’t we talk about this. I was just doing my own thing. I wasn’t even bothering you–

ANDREA: Suck rock zomber scum! Now that you are no longer dangerous, I can use you as cover on my way to the prison. This is going to be fun.
Andrea hoofs it to the prison…

ANDREA: I can’t wait to see the old crew. I miss those dudes so much. I will talk to them and straighten everything out. Derpy derp.

MAGGIE: What the fuck!!! RELEASE THE HOUUUNDS!!!

ANDREA: Hi Rick! I’m so glad to see you guys—WTF?!? Why are you treating me like I am sleeping with the enemy?

RICK: Are you here alone? WTF are you doing here, Benedict Arnold?

ANDREA: Man that sucks. Shane would have been able to help me sort all this shit out. Wait a minute…where’s Lori? I fucking hated her so much.

MICHONNE: Andrea you are fucking stupid. You gave up ME for the g’damn Governor? How stupid could you be? I tried to kill him just to piss you off. He’s a dick.

MICHONNE: If I were you, I would go home, sex him up nice-like, and slit his throat while he is asleep. DO IT.

ANDREA: Michonne was right. I’m gonna go back and be a total double agent. The Governor is a dickhead, and he must be stopped from murdering my whole crew.
That night back at Woodbury

ANDREA: Now’s my chance. Let me do a quick naked butt in the moonlight walk, and then Ima end this war before it starts. ASSASSIN!!!

ANDREA: Wouldn’t this be a surprise! Something unpredictable might actually happen if I killed him. Wait. No. I can curb stomp a zombie, but I just don’t have the heart to kill an evil dude in his sleep.

ANDREA: Nevermind. I think things will work out fine if I don’t kill him. Ima go make a sandwich instead.
The End. 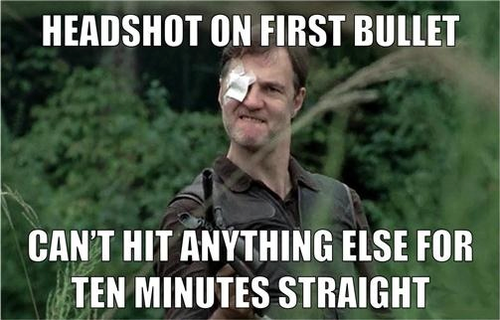 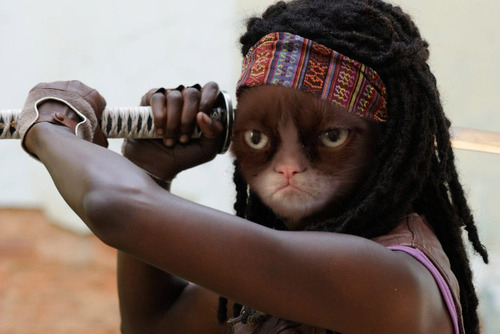 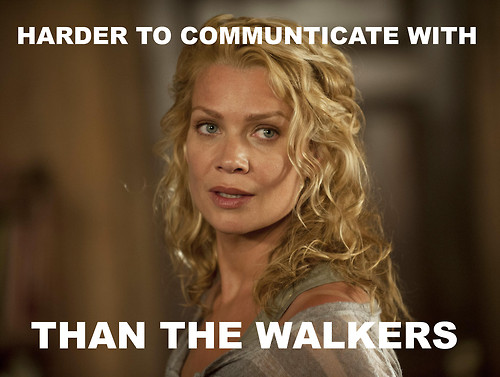 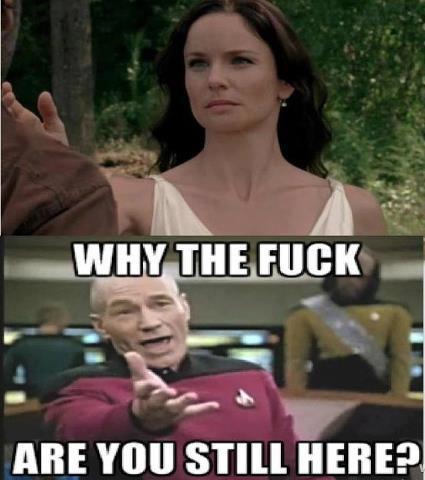 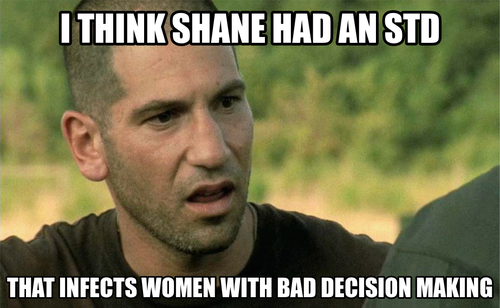 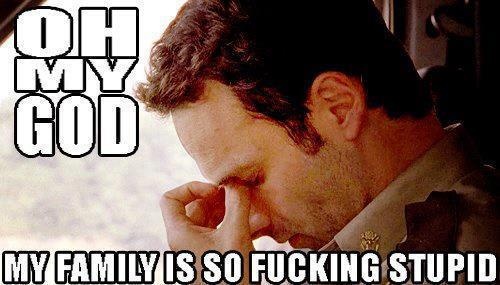 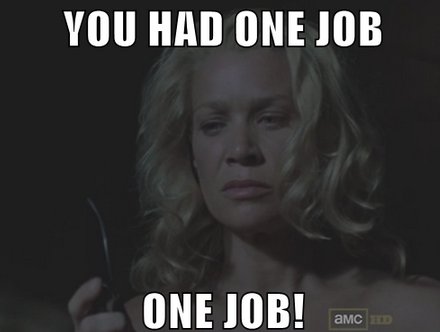 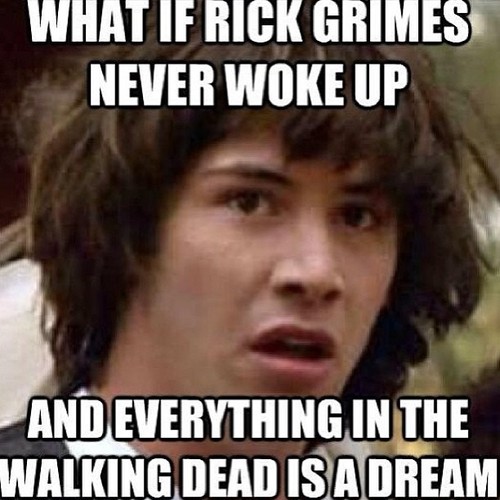 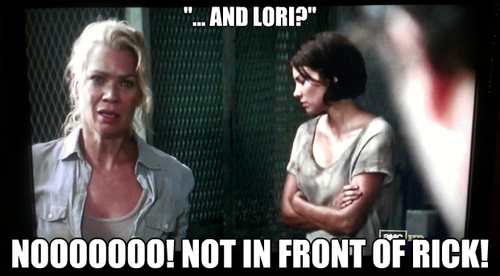 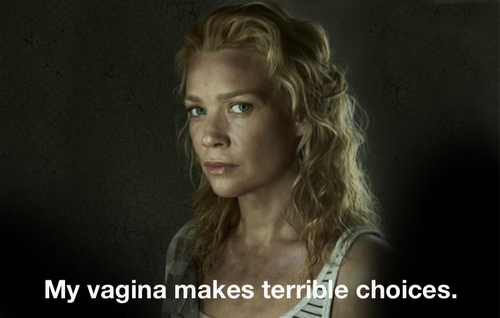 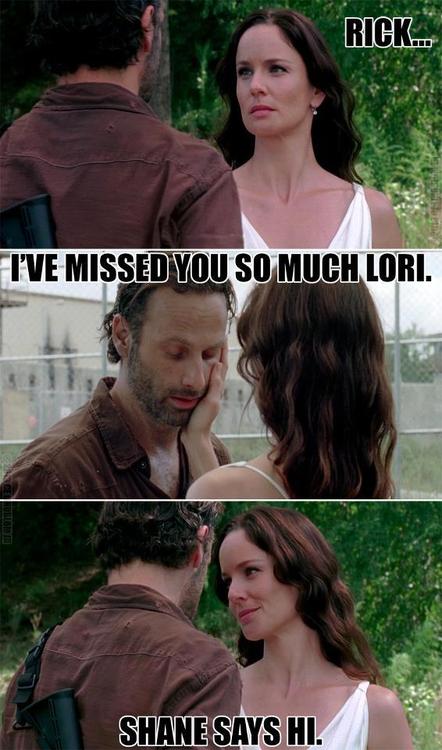 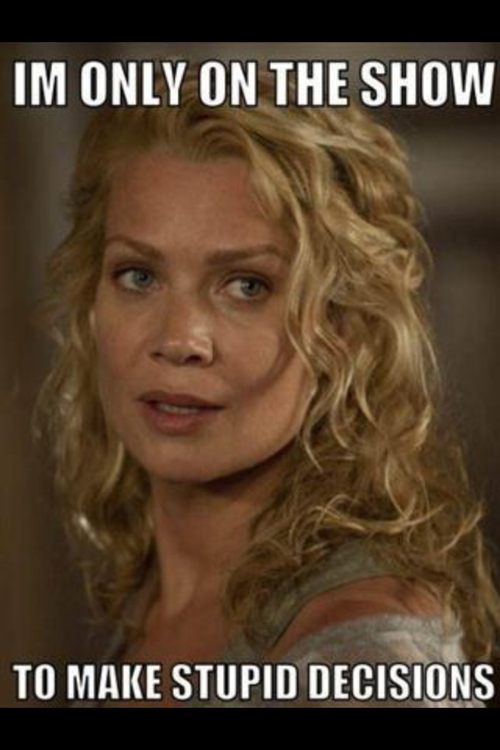 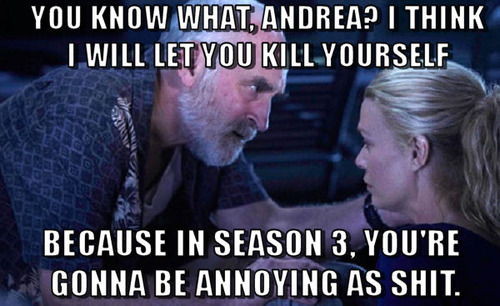 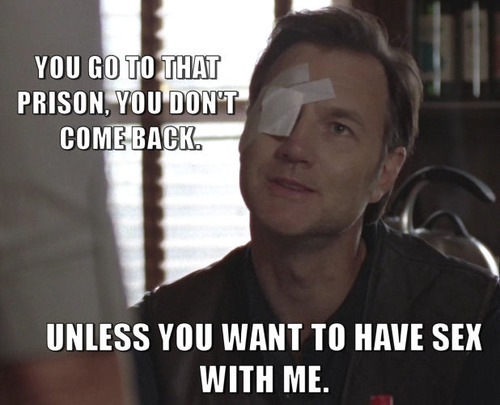