Kim Dotcom offering money if you can defeat Mega’s encryption. Get at it! 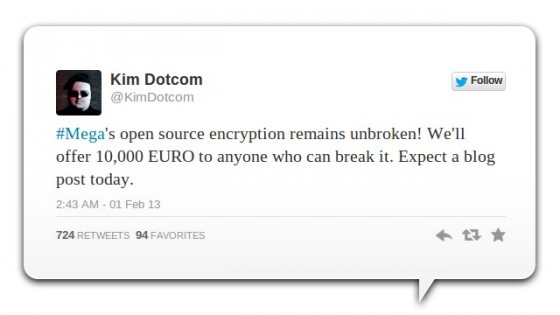 Kim Dotcom has offered a flourishing bounty of ducats, should someone be capable of defeating his new file-sharing service’s encryption. Now, I don’t really know anything about encryption. I don’t. However, what I do know about is the Internet. And generally I’ve found that where there is an Internet, there is a way.

A few weeks into its existence, Mega is holding up pretty well. It’s fended off its first round of takedown requests and is still crouched safely behind its wall of protective encryption. In fact, Dotcom is so confident in that encryption, he’s offering free money to anyone who can break it.

The €10,000 ($13,850) reward was announced by way of a tweet, with a blog post on the subject promised later today. From the get-go, Mega has been taking a lot of tips from the cryptography community, which has been picking apart the service’s security and providing what amounts to a pro bono encryption spell-check. This challenge should serve as an effective solicitation for a little more.

Google, Dropbox, Firefox and others also offer money for bugs, but Kim Dotcom is being pretty singularly antagonistic in his approach; this is a challenge. And if a hacker could find his or her way through Mega’s encryption, it would be well worth the 13 grand, considering that’s really the linchpin of this whole service. But the real question is: does that also apply to the US government? [Kim Dotcom via The Next Web]