Super rare original XBOX is gnarly swag, and can be yours! 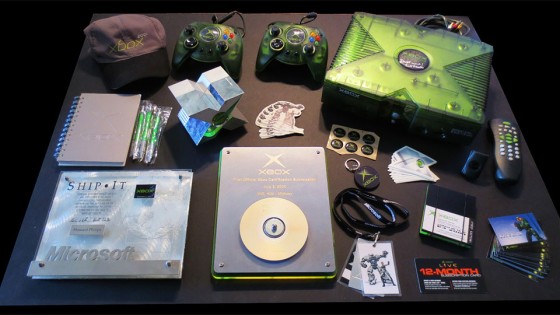 Goddamn, the original Xbox was a garish piece of bloat. Even this super rare collector’s edition version of the system is nasty. Don’t take too much offense, Xbox. I loved you. Well, sort of. I played a lot of Halo on you, and that has to count for something. Though, if I’m being truthful I never thought your predecessor would be one of my favorite systems of all time, but the Universe is tricky! I digress. Here is a ridiculous collector’s item. Go. Buy it. Mail it to me.

Howard Phillips may be a Nintendo legend, but after he left that company in the early 90’s he would eventually find his way to Microsoft in time to play a key role in the launch of the original Xbox.

Which explains why he’s now selling one of the coolest Xbox lots I’ve ever seen on eBay.

Spotted by GameSniped, included is a range of stuff that Xbox fans/collectors could normally only dream about, like a marked, translucent green console that was only given to launch team members, a machined model of the original Xbox prototype (made famous by J Allard), a bunch of swag and original Xbox Live coupons, and one very special item.

Phillips calls it the “grail” of Xbox collecting, and while that may be a bit of a stretch, it’s certainly a one-of-a-kind item. It’s the very first game disc submitted to Microsoft for the Xbox console, making it, technically, the first game ever for the platform.

It’s NHL Hitz, and was submitted in July 2001. Not much of a game, then, but it was important enough for the then-head of the XBOX Certification Team to commemoratively mount it, and for Phillips to make such a big deal about it now.