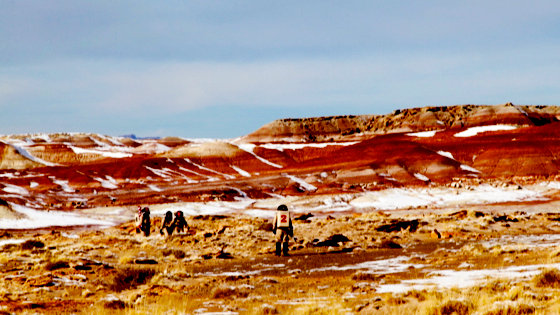 Out in the vast wilderness of Utah, there is a Mars colony afoot! I have no idea what Utah actually looks like, but from the pictures it seems like endless rolling red sand and Martian colonies. Okay, so I haven’t looked at the pictures either. Who the fuck cares. What does matter is that there is a legitimately simulated Mars colony, and we aren’t there.

OK, so they’re not living on Mars. But they’re doing the next best thing, which is participating in a simulated Mars colony in Utah, where they are learning a lot about how people would behave in a harsh, cold climate with nothing but a small trailer full of atmosphere to live in. Organized by the Mars Society, this simulation might one day provide a template for the first people to actually homestead on the red planet. Science fiction author Diane Turnshek is there right now, and told io9 via email:

I’m out at the Mars Desert Research Station north of Hanksville, Utah. It’s a simulated Mars base run by the Mars Society—six of us are living for two weeks in sim, as if we really are on Mars. We wear spacesuits outside, ride ATVs, have a 20-minute communication time lag, eat rehydrated/dehydrated food and practice extreme water conservation . . . Great scenery—the recent John Carter of Mars movie was filmed here.