Does anyone else regularly think about the intro sequence from Ghost In The Shell? I remember how amazing it was. I loved watching that shell being born: all dripping liquid and hydraulics. Birth without all the mess: I can dig it.

As I step out of the shower, I feel a similar kind of (re)birth and I’m ready to fill this pool up with enough gaming news to drown anyone foolish enough not to wear water wings. Get in.

This year, both Street Fighter and Mega Man celebrated their 25th anniversaries. What this means is that Capcom have a lot to be proud of, and that many of us are as old and dusty as my garage. Crazy old. Overwhelmingly dusty. Despite a fairly lavish Street Fighter anniversary set that turned out to have dick-all of worth in it and a Mega Man iOS title that seemed to rub fan’s noses in it rather than actually give them anything to celebrate, it’s fair to say that Capcom have missed the celebratory opportunities in the most spectacular fashion. Thankfully, the games’ fans, dedicated as they are, will always be willing to go the extra mile.

Street Fighter X Mega Man is a free PC game that pits Mega Man against the World Warriors in classic, punishingly difficult fashion. You can find it on Capcom Unity on the 17th of December. Although Capcom officially had nothing to do with it, they are now endorsing it, which is great. I think this guy should probably be running their marketing department by now.

Can you guess how hard I fought against myself in order to stop adding ‘from my cock’ on the end of that headline? Super hard. Yes, I know I’ve managed to nullify the effect anyway by bringing it up now, but this is something akin to progress for me.

Anyway, would you look at this? Dear Lord, and your physical earth-form known as Ken Levine, please deliver this unto me as soon as cosmically possible. I’m not patient enough for earthly methods of delivery: I need this game transported via the ethereal UPS right now. Or I’ll wait until March, whatever.

This latest clip overflows with what seems to be Infinite’s essence: dynamic, sprawling and chaotic battles. Giant, steam-powered Handymen chase you; destroying scenery as they pursue you through skylines and the streets of a floating city. I’m finding it impossible to figure out a reason not to be immature and disproportionately excited over this. 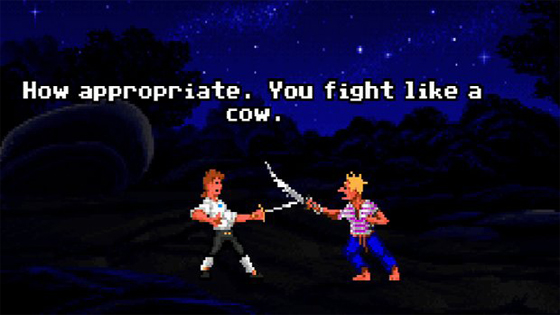 When Disney bought LucasFilm earlier in October, all I could think was that maybe they’ll finally do a decent Star Wars Blu Ray and that I really don’t care about the disgusting amounts of money being thrown around. It’s not until the Monkey Island creator, Ron Gilbert, mentioned it, that I realised all the other licenses they’ve now acquired. Guybrush Threepwood, LeChuck, the three-headed monkey: all Disney.

“It’s kind of sad in a way. Yeah, I wish I owned Monkey Island and Maniac Mansion, you know? The fact that Lucasfilm owned them, I guess I was kind of OK with that, right? Because I made them there. But now that they’re owned by someone else–that kind of sits weird with me. It’s like, ‘Well, if someone else is going to own Monkey Island, it should be me that owns Monkey Island.’”

“My only fear with Disney is that they don’t need the money. It’s not like I could ever offer them enough money to make it worth their while for them. They just seem to be a company that hoards IP, and that kind of worries me. If it had been anyone else but Disney that bought them, I would try to go put together some money and buy them back. But because it’s Disney, maybe not. But we’ll see, you never know.”

For the record, Ron, I’m on your side. Sure, I probably don’t love Monkey Island as much as Star Wars, but then perhaps I’ve never really given Monkey Island a chance to love me back. Star Wars took a dump in my already-clogged heart and threw it back at me, but maybe things will be different with Monkey Island.

As much as I want him to be wrong, there’s a lot of logic behind the idea that Disney would probably never bother doing anything further with the license. I hope Gilbert cares enough to try to buy it back and I’m sure if he doesn’t then a Kickstarter campaign to raise the money won’t be far off. It wouldn’t be 2012 without a Kickstarter campaign.

What exactly do Ruffian Games actually do? You know, aside from providing half-assed sequels like Crackdown 2. Oh, they were working on an ill-fated Streets Of Rage re-boot? Getthefuckouttahere.

Even in this early, pre-pre-pre-pre-Alpha stage, the presentation looks (looked?) pretty well-formed. As long as the pleasure garnered from kicking in the teeth of another was suitably captured, then this game could have stolen my heart. Instead, it sort of just tugged at the edges of it: not really making the full effort required to claim and retain my most cherished internal organ.

So, let us collectively agree that this probably would have been superb, have a little bit of a cry, and then move on.

The Gamesmaster is dead

This probably won’t mean anything to you unless you’re British and approaching thirty, but the legendary astronomer and Gamesmaster himself, Sir Patrick Moore has sadly passed away. Even as a kid I enjoyed how mean he was to us younglings. Often, his floating, crudely-digitized face would dispense gaming tips to desperate kids struggling to complete Comix Zone in an age before GameFaqs and Youtube. However, more often than not he’d be sure to insult the little shits before they left: that was always my favourite part.

Gamesmaster is a big part of a sadly forgotten age for me: when gaming took over television for what seemed like a decade and my chosen hobby felt more valid than ever. More than anything, Moore’s death serves to remind me of the lack of quality broadcasting concerning video games that is currently on offer. Here’s hoping this sentiment will echo with somone who has more time and better resources than myself. Total bummer.

If you too are concerned about the lack of quality video games broadcasting, then I highly recommend that you keep an eye on Robert Florence’s latest project: This Fucking Amusement Arcade. It seems appropriately venomous and passionate. Just how I like it. Or, go make something yourself.