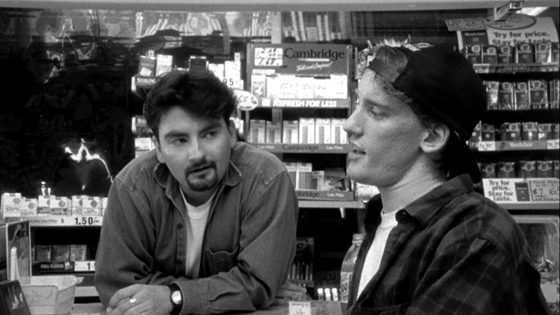 Now that George Lucas has abdicated the Star Wars throne, I suppose some hero from my childhood had to pick up his ritual of shitting directly into the heart valves of my adolescent soul. Fuck.  Clerks is one of my favorite movies of all time, Clerks 2 is a sore on my testicles that keeps oozing, and a final flick (while I will see it because I’m a sucker) makes me barf little balls of agony into my tits hair.

We knew this was coming, but I didn’t think it would make me this sad. Kevin Smith, who has been talking about his retirement for a while now, has announced thathis final film will be a second sequel to his first film, 1994’s Clerks. The news comes after his intended swan song, the two-part hockey movie Hit Somebody, was set to become a six-part television miniseries. No news yet on which channel might host Hit Somebody. Some are guessing AMC, where Comic Book Men resides, but considering Smith’s generous amounts of colorful language, I’m thinking somewhere premium would work best — who wants to watch censored Kevin Smith? (Not a lot of people, judging by the short life of ABC’s Clerks: The Animated Series — but don’t rule out a possible return for that. coughcough::get on it, Adult Swim::coughcough)

Smith’s retirement will be a bummer, considering he just proved he has stories like Red State up his sleeve; it’s sad to think he won’t try to do something else out of the box. (Insert dirty Chasing Amy joke here.) No additional information is out yet about Clerks 3, but watch for more rumblings next year. I hope Matt Damon and Ben Affleck come back for this (if they don’t do Hit Somebody, that is).

Kevin Smith Is Heading Back To The Quick Stop One More Time!! [Ain’t It Cool News]