Archives
« Andromeda has got that star cloud twinkle. Je t’aime.
Boeing has new missile that DISABLES COMPUTERS as it flies by. Haunting ++ » 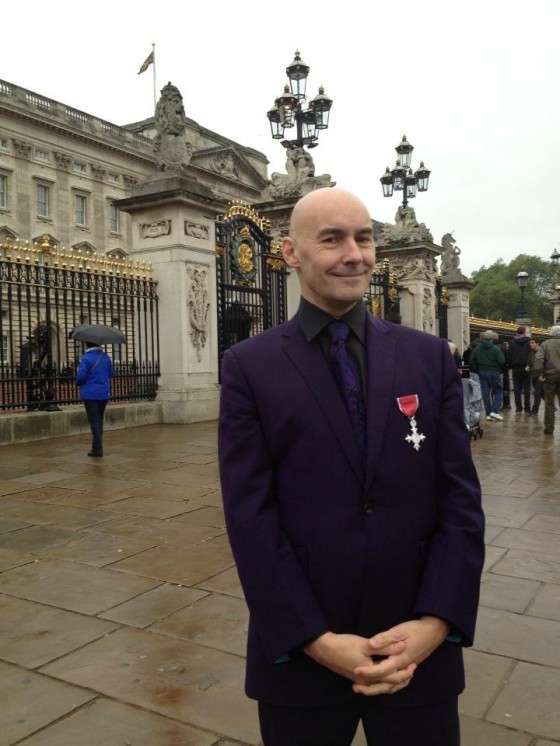 It isn’t every day that an intergalactic aliens-courting cross-dressing shaman gets a medal or some shit. So, today must be a rare day indeed. Grant Morrison has taken to Twitter to sport the rocking badge he was given by Prince Charles, an achievement that can only serve to prove how awesome the writer happens to be.

Courtesy of Grant Morrison’s Twitter account arrives a look at the Scottish scribe, clad in a purple suit, fresh from receiving the badge from Prince Charles of Wales recognizing him as a Member of the Most Excellent Order of the British Empire for services to film and literature.

“He asked me about comics, and said he used to like reading the Eagle in the 1950s,” Morrison is quoted as saying in the Irvine Herald. “”I would like to think the award is for the work I’ve been doing in America — it’s mostly British people who have changed the complexion of American comics, which has influenced the movies and TV, and expanded the sphere of British imagination.”

An order of chivalry established in 1917 by George V, the Order of the British Empire consists of five ranks, with Member being the lowest. Only the highest ranks automatically confer a knighthood.

Asked in July whether the award makes him feel more chivalrous,Morrison joked to Comic Book Resources, “No, it actually made me feel more evil, I think. I mean, when a howling witch hunt turns up on cue to accuse you of ‘joining the Establishment’ as if you’d signed up for the Secret Society of Super-Villains, what else can you do but cackle and rub your hands together? I’d love to tell you I’m now qualified to join the Round Table and declare war on Narnia but the truth is, absolutely nothing has changed.”