Archives
« Apple could be the first TRILLION dollar company between 2013 and 2015. Lots of iPhones, yo.
ROBOTIC SNAKE designed to slither through your body and eradicate tumors. Erm. » 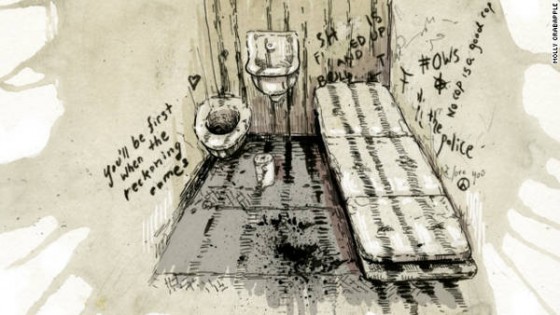 Molly Crabapple got arrested last week during the Occupy resurrection. Since then, she’s has been speaking up about her experience. I’ve noted my love for her artwork and general swagger before, and this just continues my admiration.

At one corner, I saw a cop grabbing the arm of a woman in front of me and pulling her into the street. It was the same gesture you might use to escort an old lady, and, when the next officer did this to me, that is what I thought it was. But then, halfway across the street, he cuffed my hands behind my back.

There was no warning. No Miranda rights like in the movies. At first, I was incredulous. It was not until I got my desk ticket that night for blocking traffic that I had any idea what the officer was accusing me of doing.

I was a head shorter than the officer. I said to him, “You know I was on the sidewalk.” He wouldn’t meet my eyes. I was two blocks from my apartment. But because I was part of a protest, I was no longer a local. I was an obstruction to be cleared.

Going into the police van, they snapped my picture on a Fujimax Polaroid knockoff, hipster party style. I gave them my best grin. A man in a suit passed by, looked us over, and said to the police, “nice work.”

My arrest at Occupy Wall Street