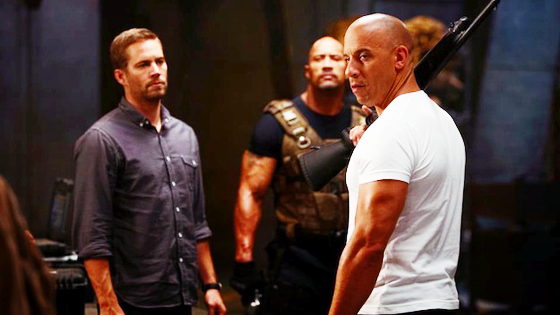 Oil your fucking shit! Get your best homoerotic pose on! Prepare for the blood bath of misplaced semen and phallic objects that is the newest installment in the Fast & Furious franchise. We got ourselves a fast-paced (ha!) batch of new images for you to chomp upon. Heck yeah!

It’s virtually unheard of for a series to peak with its fifth installment, but by quite some distance, 2011’s “Fast Five” turned out to be the most entertaining of the illegal-road-race franchise (which now has very little to do with road racing). Director Justin Lin, in his third film of the series, cracked the secret that time around, partly by adding the charisma of Dwayne ‘The Rock’ Johnson to the cast as a supercop tracking down fugitive speed freaks Vin Diesel and Paul Walker, and the film became a monster worldwide hit, by far the biggest of the five.

As such, “Fast & Furious 6” landed a key Memorial Day release date next summer, and filming is currently underway in London. And its social network-happy stars have just unveiled some new looks at the new film, with Vin Diesel adding what look to us like the first official stills from the film on his Facebook page (viaComing Soon). To be honest, they look like they could have come from any of the previous films, but all the ingredients seem to be present and correct — cars, angry bald men, and Paul Walker standing around in the background, just thankful he was asked back.

The first image does at least suggest that Johnson’s character, Diplomatic Security Service agent Luke Hobbs, may be joining forces with Dominic Toretto and Brian O’Conner (and yes, we did have to look up those names) this time around, presumably to bring down the film’s villain, played by Luke Evans. Johnson also got in on the image-sharing act, tweeting the behind-the-scenes-photo below, accompanied by the description “On set. FAST 6. Take 1: Rock throws man into table so hard entire ceiling crashes down. #MyBad.” Awesome. 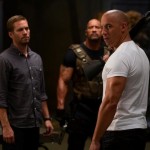 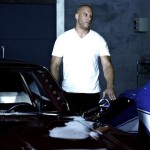 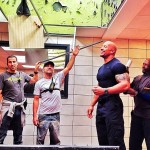