Archives
« Disney World kicks dude out for looking TOO MUCH like Santa Claus. Harsh, yo.
Marvel and ABC working on TV SHOW set in the Marvel MOVIE UNIVERSE. » 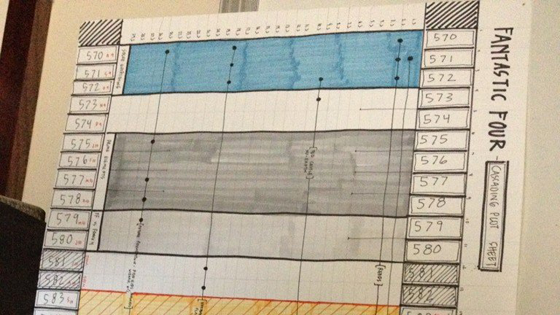 Whilst coming to an end, Jonathan Hickman’s run on Fantastic Four has been one of my favorite extended takes on a superhero rag ever. Goodness me, there’s a twinkle in my eye just thinking about it. Let’s side-step wanking on the variety of tropes used, philosophical themes discussed, and what I found to be its endearing and powerful final message: it’s about family, stupid, and focus on something else. The run was meticulously plotted with an absurd amount of storylines running concurrently through years of work.

How’d Hickman pull it off? This boner-inducing outline.

Jonathan Hickman is a comics writer known to his peers, collaborators and hardcore fans as a methodical plotter. The creator of The Nightly News and Pax Romana and writer of Secret Warriors is indeed so diligent in his preparations that his series outlines eschew the standard text-based format and take the form of intricate charts or graphs that delineate precisely what and when something will occur in his long form serialized stories.

The most popular of Hickman’s sagas is Fantastic Four and its spinoff title FF, the last script for which he submitted to Marvel this week. In honor of completing his acclaimed run (one that has prompted copious annotations by our own David Uzumeri), Hickman tweeted what he identified as the first outline for the series. It is an all but inscrutable chart whose secrets we may never understand, but it seems to track the various plotlines as they progress through 30 issues of Fantastic Four. 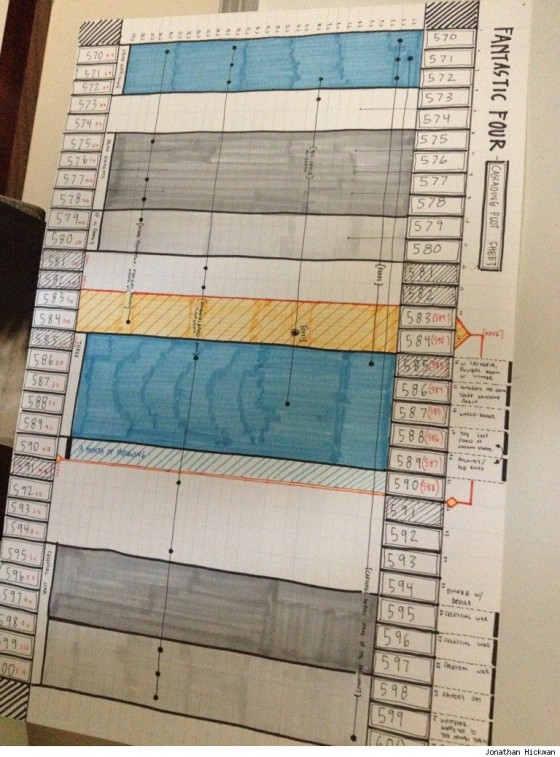