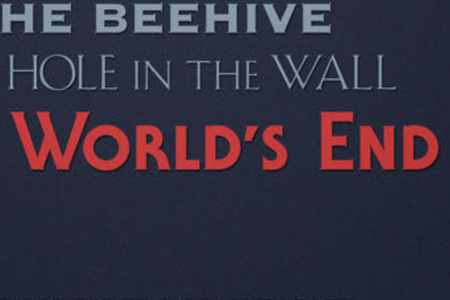 Hell yeah. Teasing tips everywhere this weekend at Comic-Con is a poster for Edgar Wright’s The World’s End. It ain’t much, but it is enough.

Well, we figured it was pretty much a done deal since the last announcement, but good news has arrived on Day 2 of Comic-Con: Universal have officially given the green light to “The World’s End,” the latest film from director Edgar Wright and co-writer/star Simon Pegg, which will close out their unofficial trilogy that started with “Shaun Of The Dead” and continued with “Hot Fuzz.”

“The World’s End” has been talked about for years, but Wright & Pegg finally opened up recently, and now the film is officially on. And to mark the occasion, the studio have released a special Comic-Con teaser poster for the movie, which revolves around the grand British tradition of a pub crawl (where you gather in a group, and drink one drink at a number of establishments, normally until you pass out or throw up). Deadline’s plot synopsis reads: “The film starts 20 years after five childhood friends attempted an epic pub crawl. The friends reunite when one of them becomes hell bent on trying the drinking marathon again. They are convinced to stage an encore by mate Gary King, a 40-year old man trapped at the cigarette end of his teens, who drags his reluctant pals to their home town and once again attempts to reach the fabled pub, The World’s End. As they attempt to reconcile the past and present, they realize the real struggle is for the future, not just theirs but humankind’s. Reaching The World’s End is the least of their worries.”

The poster confirms, as if it needed confirmation, that Nick Frost will be along for the ride once again, and seemingly features the names of the eleven pubs that the characters will hit along the way; given the tight structure of Wright & Pegg’s screenplays, we imagine some plot details could be gleaned from them. For instance ‘The First Post’ is obviously the starting point, and ‘The Old Familiar’ reads, to us, like an H.P. Lovecraft reference. And now, as a result of the poster, like Bradley Whitford in “The Cabin In The Woods,” we just want to see a mermaid.

Filming will begin in October, with Focus Features set to distribute domestically, as they did for the two earlier films. There’s no firm word on a release date yet; Deadline said previously that the film was aiming for the Spring of 2013, but that seems ludicrously fast, even if Wright looks increasingly likely to jump straight into Marvel’s “Ant-Man” once he’s done on this. Presumably, casting will begin soon; who would you like to see play Pegg & Frost’s other three childhood friends? Let us know in the comments section below. 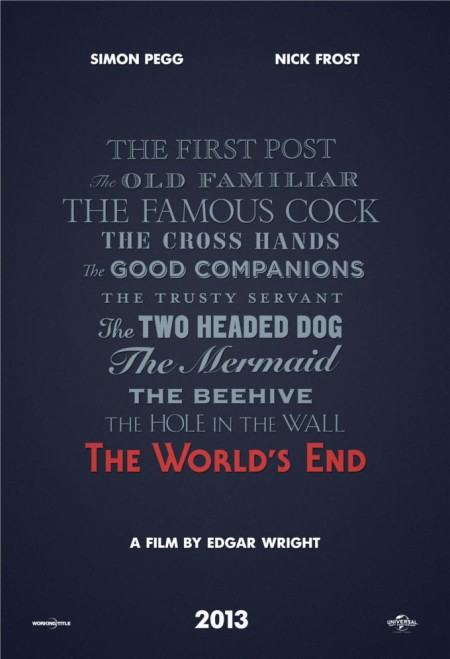