Archives
« JIM LEE ON A CAMEL.
An Alzheimer’s patient hears the songs of his era and comes alive. Music is a hell of a drug. »

‘CAPTAIN AMERICA 2’ DIRECTORS Down To Russo Brothers Or George Nolfi 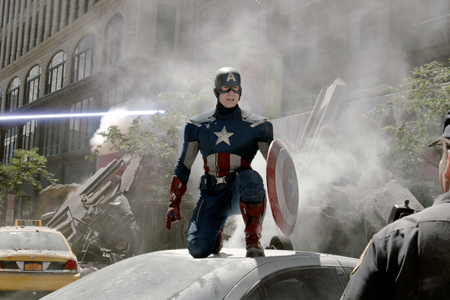 The kerfuffle surrounding Captain America 2: Cap Doesn’t Get Cellphones At All‘s potential director is becoming a bit more clear. The field, once vast and filled with hopefuls and talented lads and lasses, has been cut down to two parties.

…and then there were two. It was just over a week ago when it was announced that Marvel was looking at George Nolfi (“The Adjustment Bureau”), F. Gary Gray (“Friday,” “The Italian Job”) and Joe and Anthony Russo (“Welcome To Collinwood,” “You, Me & Dupree”) for “Captain America 2” (which has since landed a April 4, 2014 release date). Well, it looks like one name is out of the running.

Deadline reports that F. Gary Gray has left to helm the brewing N.W.A. biopic “Straight Outta Compton.” The movie was been in the works since at least 2009 and at least four writers — Andrea Berloff, S. Leigh Savidge, Alan Wenkus and Matt Alvarez — involved (Berloff has the latest credit). Ice Cube is co-producing and we honestly figured this would be stuck in development hell like many of the hip hop movies brewing in Hollywood. And while John Singleton circled last fall, he has since moved while Gray has won the gig after being shortlisted alongside Craig Brewer and Peter Berg. THR adds that “Little Birds” director Elgin James and George Tillman (“Notorious,” “Faster”) were also in the mix.

So back to “Captain America 2” — that leaves Nolfi and the Russo brothers for now, but with the movie still a long way off, Marvel has all kinds of time to make a decision (or choose someone else entirely). But hey, it looks at that N.W.A. movie is now going, so let the casting begin! Here’s hoping they have an easier time finding someone to play Eazy-E than they did with the casting call for Tupac.

Eh, fuck it. I’m not familiar with either the Russo Brothers or Nolfi. How about you folks?