A new column has arrived, brought to you in part by my unslakable lust for talented people.

I bet you didn’t know this, but I’m a huge polygamist. Not the creepy Mormon kind, but the “holy shit there are too many attractive people that I want to bang for me to even think about being monogamous” kind. You see, I have about 27 celebrity husbands and 15 or 16 celebrity wives, and I’ve been gathering my famous spouses like beanie babies since, oh, 2001. I am married to 43 people. 43, you fuckers. It’s a big list, one that has been in flux since the start. Oh, I have my fixed 10, and they will remain in their spots on the list until the day I die and take my rightful place on the throne of Hell, but I’m constantly marrying and divorcing other people like it’s my job.

And guess what? Every Thursday, you’ll get to learn about 1 or 2 of them. Prepare yourself for Cinematic Polyamory, or “R.C.’s ovaries explode so often that the frequency can’t be textually rendered”. This post is a little late, as I spent last night stuffing my face at a fundraiser dinner, so apologies for cluttering up the Friday dashboard.

But why don’t we begin this ridiculousness with my number ones? 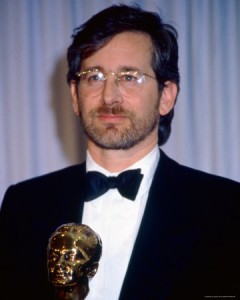 Oh, Steven. You were on the list before there even was a list. Before I even understood what it is directors do. As a little girl, I watched four movies and four movies only: Close Encounters of the Third Kind, E.T., Hook, and Jurassic Park.  There wasn’t room for anything else (until 1997, which seemed to be the year for sci-fi). My mother was all, “There is something wrong with this child” and my dad was like, “I have the coolest daughter ever.”

Steven is first and foremost on the list because he helped me to look past the surface beauty of the stars and the ocean and the entire world and see them for what they truly are: the vast perhaps. There is so much possibility out there — literally, and creatively — and for a child with an already overactive imagination it was almost like vindication.  It was permission. Thanks to Mr. Spielberg, I didn’t stop drawing dinosaurs and UFOs all over my homework (much to my teachers’ chagrin), I didn’t stop pretending my backyard was a far off place that needed to be explored, I didn’t let the more gullible of my friends know I wasn’t really  the human form of the Loch Ness Monster,  and I certainly didn’t buy into the need to grow up faster than I should. Even before I knew I wanted to write movies, and even before I knew I wanted to write, Steven set the stage for me, put all the pieces together, and said, “dream big. And when you’ve done that, do it again, except bigger.”

Also, he looks damn fine in a tuxedo. 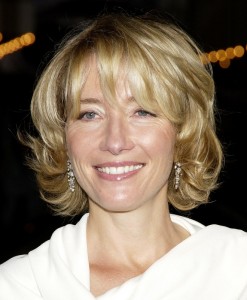 Ah, Ms. Thompson, how do I adore thee? You see, growing up, I didn’t have a lot of female actress or director role models. I had Jodie Foster, I suppose, and Sigourney Weaver, but they were actresses and I didn’t want to act. I wanted to write. I wanted to create. I was that kid at the beach who was like, “IT’S NOT  A SANDCASTLE, IT’S A HILL FORT FOR KING ARTHUR BECAUSE MORDRED IS GOING TO USE HIS FLYING VELOCIRAPTORS TO TRY AND TAKE MERLIN.” Didn’t run into that kid? Must not have gone to the beaches I went to, then.

I was in the 8th grade when I first saw Sense & Sensibility  and was absolutely blown away by the adaptation of the novel I loved so much. How could they fit everything Jane Austen intended the reader to experience into a movie? I kept asking myself this. Then I learned exactly how. Emma Fucking Thompson, who not only wrote the screenplay but goddamn starred in it and owned the role like she was the one who created it. It was the first year I watched the Oscars and I cried when she won for Best Adapted Screenplay. By that point, I’d been writing screenplays for years, but seeing her win it made it seem like actually doing something with them could be done. I suddenly had plans  for them.

Emma isn’t just an incredible actress and writer, but she’s also goddamn funny as anything, and she doesn’t take any shit from anyone — especially when it comes to the beauty standard in Hollywood. During filming of Brideshead Revisited, Hayley Atwell was having dinner at Emma’s house, who became concerned when Atwell wasn’t eating what was given to her. Atwell said the Miramax executives told her to lose weight for the role, and Emma hit the fucking roof. She was so angry that not only did she tell the executives she would quit the film if they forced Atwell (who was already tiny) to lose weight, but she had gigantic pasta dinners every week for the cast after that. LIKE A BOSS.

That’s the kind of role model young women need: someone who will flip tables and shit if you don’t clear your plate or worry you don’t meet society’s expectations. Bitch owns my heart.