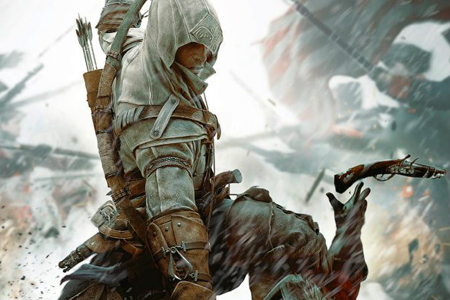 The marketing machine for Assassin’s Creed 3  is vomiting out press release, commercial, and info at obscene rates. Ubisoft is shoving it down our gullets and gleefully clapping as it falls out our ass, half-chewed. All of this nonsense is paying dividends for the swine.

Ubisoft sent out a press release today boasting massive pre-order numbers for  Assassin’s Creed 3, stating it’s on track to be the highest pre-ordered game in the company’s history.

Ubisoft claims pre-orders for  Assassin’s Creed 3  in its first three weeks reached ten times the pre-order numbers earned by  Assassin’s Creed Revelations  in the same stint. People must  really  be pumped to do some  virtual canoeing.

By  E3, which takes place June 5 to 7 in LA, Ubisoft expects pre-orders to exceed total life-to-date pre-orders for  Assassin’s Creed Revelations  in the US, the current Ubisoft record holder. The franchise isn’t showing any signs of slowdown, even though  Revelations  was met with reserved critical reception.

Putting my snark back into my pockets, I’m pretty bonerfied about the game. Me thinks it’ll be the first game in the series I’ve crushed since the second title.