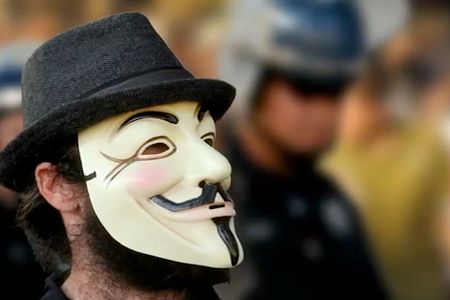 Anonymous has been on the rocks lately, with their leader selling them the fuck out, releasing an OS with malware or some shit, and other unfortunate incidents. They intend on rallying this Saturday by killing the internet. I suppose if you’re going to ball, ball hard.

Trying to show they’re still dangerous and relevant after getting thoroughly rogered by the FBI and CIA last month, Anonymous has announced that on March 31st, they plan on DDoSing the shit out of the world’s 13 DNS servers, shutting down the internet. Their plan would work much better I’m sure if they didn’t blab about it a week ahead of time.

The DDOS campaign is expected to target the world’s 13 domain name servers (DNSs), that allow the public to use the internet by translating human legible text-string URLs into machine-readable IP addresses. If the attack indeed materializes and if the DNS servers are all taken down, the Mayan apocalypse could come early – the internet could blink offline.

By cutting these off the Internet, nobody will be able to perform a domain name lookup, thus, disabling the HTTP Internet, which is, after all, the most widely used function of the Web. Anybody entering “http://www.google.com” or ANY other url, will get an error page, thus, they will think the Internet is down, which is, close enough. Remember, this is a protest, we are not trying to ‘kill’ the Internet, we are only temporarily shutting it down where it hurts the most.

The posting goes into the planned attack in explicit detail. The tool use will be the Reflective DNS Amplification DDoS tool. By spoofing the DNS server with small UDP packets which appear to have orginated from the DNS server itself, the attacker tricks the DNS server into sending messages to itself creating a cascade of failures. The “amplified” part comes from the fact that the sent packets are small, but they trigger a large barrage of data.

If they could pull this off, they’d be seriously surfing a wave of badassery and absurdity. Plus, on a personal level I’d really appreciate it. No easier way to give me the weekend off from having to blog big news items than taking down the internet. Have at it, hacker girls and guys.