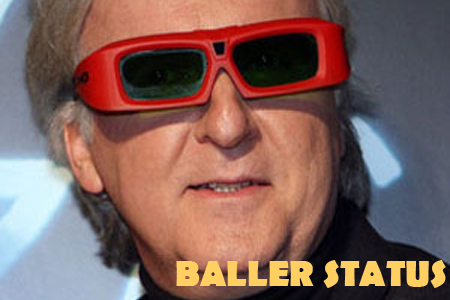 James Cameron don’t give no fucks about a variety of things, including character depth, being condemned for postulating the typical idea that a white man has to save the savages from themselves, titties on Titanics, and more.  He also doesn’t give a fuck about the ocean, ’cause he’s gone and conquered it.

The director of “Titanic,” ”Avatar” and other films used a specially designed submarine to dive nearly seven miles, completing his journey a little before 8 a.m. Monday local time, according to Stephanie Montgomery of the National Geographic Society.

He plans to spend about six hours exploring and filming the Mariana Trench, about 200 miles southwest of the Pacific island of Guam.

“All systems OK,” were Mr. Cameron’s first words upon reaching the bottom, according to a statement. His arrival at a depth of 35,756 feet came early Sunday evening on the U.S. East Coast, after a descent that took more than two hours.

The scale of the trench is hard to grasp – it’s 120 times larger than the Grand Canyon and more than a mile deeper than Mount Everest is tall.

Mr. Cameron made the dive aboard his 12-ton, lime-green sub called “Deepsea Challenger.” He planned to collect samples for biologists and geologists to study.

“It’s really the first time that human eyes have had an opportunity to gaze upon what is a very alien landscape,” said Terry Garcia, the National Geographic Society’s executive VP for mission programs, via phone from Pitlochry, Scotland.

The first and only time anyone dove to these depths was in 1960. Swiss engineer Jacques Piccard and U.S. Navy Capt. Don Walsh took nearly five hours to reach the bottom and stayed just 20 minutes. They had little to report on what they saw, however, because their submarine kicked up so much sand from the ocean floor.

One of the risks of a dive so deep is extreme water pressure. At 6.8 miles below the surface, the pressure is the equivalent of three SUVs sitting on your toe.

Condemning Avatar  aside, this is a pretty boss move. As a science dork, I am eagerly awaiting whatever sort of goodies he finds down there. Perhaps Namor, or the Leviathan, or Atlantis. Something awesome like that. I mean, that’s gotta be what’s down there. Right?