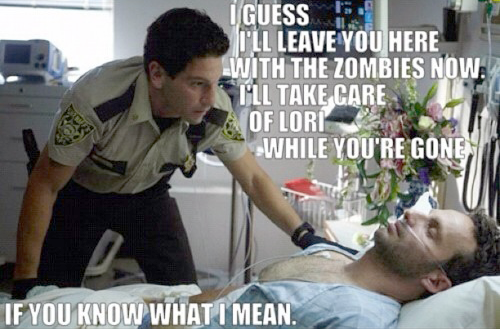 Shit rolls downhill at OL. So being the new guy, not only am I relegated to writing pompous, over-worded  book reports about Kenny Powers & friends, but now I’ve also been tasked with summing up new episodes AMC’s The Walking Dead.  Since the show is literally  schmeared  in bullshit and really loud, repetitive commercials. I thought I might do everyone a favor and reenact what REALLY happened, without the agonizing tender moments that encompass 95% of the show. What’s left is my boyish take on a show that seems like it was intentionally made to drive me crazy.

Enjoy. Or don’t. Whatever.

We pick up, right were things left off…

SOPHIA: HAHA!!! I ended up being in the barn this whole time. Too bad you dumbasses wasted an entire season looking for me, just to find out I was chilling in Hershel’s secret zombie pen out back.

She along with the rest of the undead chilin in the barn are dispatched in dramatic fashion.

HERSHEL: How dare you kill my zombie wife! I was holding out for the cure. Get off mah property!!!

SHANE: Old man, I will gouge out your eyeballs and skull fuck you. I have the biggest murder-boner right now. You don’t even know!

RICK: Maybe I should stop putting my spotless moral compass ahead of our collective safety at every single decision point. Maybe not.

Either way, the lesson here is from now on we don’t just arbitrarily go running off after people when they disappear. No matter what. Nothing good ever comes from it.

HERSHEL: I’m old and upset they killed my undead wife. I think I’ll sneak off to zombie town bar and get crunk.

RICK: WTF? Hershel? Disappeared? WE BETTER GO ARBITRARILY RUN OUT AND FIND HIM!!! Glen get in the car.

MAGGIE: I love you Glen.

Rick and Glen leave to go find Hershel, who is getting sauced in town. Before they even get to town…

LORI: Dale despite your complete lack of proof, and extreme senility, my pregnant women’s intuition agrees.

I know they just left 2 minutes ago, but…WE NEED TO ARBITRARILY GO AFTER RICK!!!

LORI: Daryl, will you help me go find Rick for no reason whatsoever?

LORI: Rick has been gone 30 minutes. I can’t just sit around and let this happen. Forget that I am preggers, I’ll just have to go look for him by myself.

LORI: Derpy Derp. Where am I going again? I better take a look at this map and not pay attention to the road. Oh noes!!!

Meanwhile at the Saloon…

RICK: I know you feel like a dumbass about the whole zombie-wife situation, but as leaders we can’t be expected to make good decisions. That would make for a much less interesting tv drama. What else would we fill the entire hour of programming up with besides cleaning up after our stupid de–

DAVE: What’s good? I’m Dave and this is fat Tony. We’re from Philly and looking for a place to crash. Can we hole up with yous guys?

DAVE: Seriously? Not chill. Maybe we will just have to kill you and move in on your poontang…Philly style.

RICK: I don’t think so, bitch.

RICK: That’s how I roll. Nobody fucks with the Rickster! Run and tell that, homeboy.