Archives
« Buckle Up, Pussies. It’s the U.S. Trailer for THE RAID
Last Week on The Walking Dead – Nebraska » 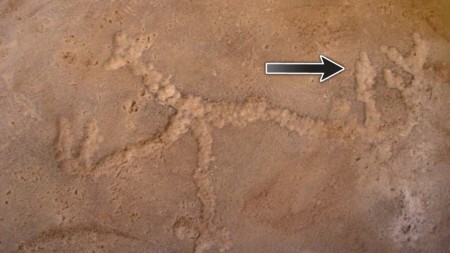 This shouldn’t be a spoiler alert for anyone who has spent a good amount of observing human history. We’ve always loved our dongs and she-dongs (internal dialogue, why is it a she-dong  and not a he-vag  you normalizing pig?). The proof is in the pudding. Or at least our ancient drawings.

The research team, led by University of SÃ£o Paulo’s Walter Neves, discovered the carving in 2009 while excavating Brazil’s Lapa do Santo rock shelter.

“During the final days of excavation… an anthropomorphic figure was exposed at the bottom of the archaeological deposit at an approximate depth of 4.0 meters,” explain the researchers in the latest issue of PLoS ONE. They continue:

The figure was pecked in the bedrock and consisted of a small anthropomorphic filiform petroglyph with tri-digits, a c-like head, and an oversized phallus. The figure is 30 cm long (from head to feet) and 20 cm wide.

When the researchers carbon dated the rock art, they determined it to be between 9,000 and 12,000 years old. Artistic manifestations created during the Upper Paleolithic (ca. 40,000 to 10,000 years ago) are exceedingly rare, and are almost unheard of in the Americas. That makes this finding interesting on a couple of levels. The researchers write:

These data allow us to suggest that the anthropomorphic figure is the oldest reliably dated figurative petroglyph ever found in the New World [i.e. the Western Hemisphere], indicating that cultural variability during the Pleistocene/Holocene boundary in South America was not restricted to stone tools and subsistence, but also encompassed the symbolic dimension.

At least my permanent immaturity is tied directly into a lineage thousands upon thousands of years long.